Bayern Munich and Borussia Dortmund will meet at Allianz Arena on Saturday Mar. 6, 2020 in Bundesliga action with the game set to kick off at 17:30 local time (12:30 p.m. ET)

Heading into this Matchday 24 fixture, Hans-Dieter Flick and his Bayern Munich squad are seated in 1st place in the league with a total of 52 points from their 23 games played while Edin Terzic and his Borussia Dortmund team sit with 39 points in 5th place.

The two clubs are separated on the league table by 13 points and 4 places with 23 matches played so far this season.

ESPN+ subscribers can watch Der Klassiker on Saturday between Dortmund and Bayern, plus every other Bundesliga game this season!

Having won 10 points from their last five matches, Bayern Munich had a win against FC Koeln in their previous contest and now own a form run of W,W,L,D,W.

Visitors Borussia Dortmund had a win against Arminia Bielefeld in their last contest and have claimed a total of 10 points from their last five matches to give them a form run of W,W,W,D,L.

In their last five matches played at their Allianz Arena, the hosts Bayern Munich have now won a total of 13 points.

Their opponents Borussia Dortmund have claimed 6 points in their last five times playing on the road.

Over the years, Bayern Munich and Borussia Dortmund have met on a total of 59 occasions.

Matches between the clubs have ended drawn on 9 occasions.

In their last game, Bayern Munich got the win and earned three points. FC Koeln was the opponent of Hans-Dieter Flick’s men.

After 90 minutes, the score was 5-1. In their match against FC Koeln, Bayern Munich had the following ball possession : 54%. Looking at shots on goal, Bayern Munich, in its previous game, shot 13 times on target and in the same game, Hans-Dieter Flick’s men gave up 7 shots.

In their last game Borussia Dortmund came away with a victory. Arminia Bielefeld was their last opponnent. When the referee called fulltime, the score was 3-0.

According to the oddsmakers, the favourite for this match between Bayern Munich and Borussia Dortmund is the home squad -- Bayern Munich. 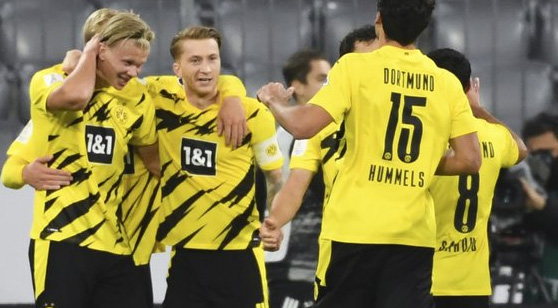 Borussia Dortmund will be looking for revenge when it meets Bayern Munich on the road this Saturday in Bundesliga action. (AP)

No other game is bigger in the Bundesliga than the Klassiker and the second go ‘round between Bayern and Dortmund could see a similar result like their first encounter.

Bayern is a clear-cut favorite and while the “Bavarian Giants” sit atop the table, many would agree that this isn’t the best squad we’ve seen in recent years but they are very fun to watch.

Offensively, nobody is close to them in Germany as the attack has posted 67 goals but the defense has conceded 32 goals and backing “Both Teams to Score” in Bayern games has been as good as gold this season.

Dortmund could be limited for this clash with both Jadon Sancho and Raphael Guerreiro nursing injuries. BVB hasn’t won at Bayern in league play since 2014 and while I expect them to see the net on Saturday, they’ll be chasing all day long.

Bayern is averaging 3.8 goals in 11 home matches this season and they've only posted two clean sheets during this span. Nobody has defeated them but three draws are on the resume, allowing three goals in two of those ties.

If Flick's squad shows up and does well finishing, they post four-plus goals easily on anybody and I believe that's the case in this spot.