La Liga rolls on Thursday afternoon after a pair of draws and a convincing victory by Atletico Madrid against Osasuna on Wednesday. Thursday's battle between Real Madrid and Valencia features a battle between two teams in the top eight of the La Liga table, so it should be quite an entertaining event. Home teams were 1-0-2 on Wednesday, but 0-2-1 in Tuesday's action, and 0-1-4 across the previous two days.

Real Madrid didn't exhibit much in the way of rust in their return to action against Eibar, rolling to a 3-1 win last Sunday, firing out of the box with a pair of first-half markers. Meanwhile, in one of those bevy of draws, Valencia and Levante ended up going home after a 1-1 tie last Friday. The good news for Valencia is that they've had two more days off to relax and get ready for this match. 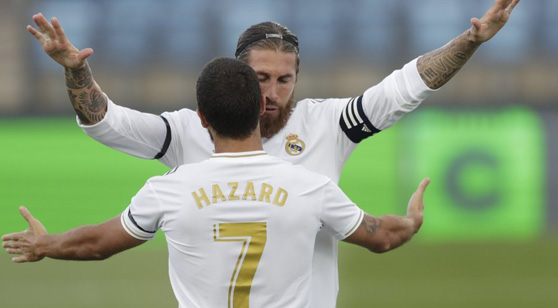 Real Madrid kicked off its La Liga restart with a win and the club is listed as a healthy favorite for Thursday's match vs. Valenca. (AP)

Overall Real Madrid has been rolling right along, as they sit five points behind high-flying Barcelona in the La Liga table. While the point disparity isn't great, Real Madrid has 52 goals to 69 for Barca. The disparity between the top spot and second place isn't quite a gulf like the English Premier League, but there is still quite a difference between the first and second spot. Dani Carvajal (ankle) is not expected to play, while Nacho also continues to deal with a long-term injury.

Valencia's Jose Gaya and Gabriel Paulista continue to deal with ailments, although they could potentially be ready to return. Mouctar Diakhaby committed a costly penalty against Levante, leading to the equalizer, so he might be out of the lineup as Valencia moves some things around to find a winning combination.

It's tough for Valencia, as they have dropped five in a row on the road. While they won't have to battle in front of a hostile, fan-less crowd thanks to the COVID-19 global pandemic situation, they're still a decisive underdog since they're not quite as strong as the hosts.

It hasn't gone well for Valencia in recent memory, as Real Madrid is unbeaten in each of their past 13 home outings against Valencia across all competitions. In the past seven matches at home Real Madrid has found the back of the net at least twice, and they have outscored Valencia 11-5 across the past five outings (3-1-1).

Valencia has won just once across the past six (1-2-3) matches overall, so they're not exactly lighting the world afire as they limp into Madrid for this battle.

Real Madrid (-265) enters play as a heavy favorite, and rightly so. They have posted an impressive plus-32 goal differential to a minus-1 for Valencia. The high-flying Madrid side will be playing on an alternate pitch, as the Bernadeu is undergoing extensive renovations, so Zinidane Zidane's side are playing their home games at Alfredo Di Stefano Stadium at their reverse team base. It didn't seem to bother Real Madrid against Eibar in their return from the pause, a 3-1 win.

The under (-162) is a good play. While you can't expect a defensive battle, as Real Madrid should be able to find the back of the net frequently, don't expect Valencia to do much offensively. They have struggled in previous trips to the country's capital, and they didn't fire out of the chute against Levante from an offensive perspective. You can expect them to struggle against Real Madrid, and it wouldn't be a shock to see them get blanked.

Benzema (-121) is the chalk in the single goal, score anytime props. He has buried 14 markers in 27 games, and the nearest competition on his own team is Sergio Ramos (+280) with six in 26 outings. Gareth Bale (+170) is back from injury, and he could be ready to find the back of the net in this one, too, although he has scored just twice across 15 La Liga competitions this season.