The Philadelphia Eagles (9-8) square off against the defending Super Bowl champ Tampa Bay Buccaneers (13-4) at Raymond James Stadium on Sunday. ET in the NFC wild-card game. Kickoff is scheduled for 1:00 p.m. ET, and the game can be viewed on FOX.

The Eagles head into the playoffs as the seventh and final seed in the NFC. The last time we saw the Eagles was Saturday, Jan. 8 in a home game against the Dallas Cowboys, and Philadelphia was trampled at home by a 51-26 score. That halted a four-game win streak, although the win streak came against four non-playoff teams.

These teams faced each other in the regular season back in Week 6 in a Thursday night game. The Eagles were upended 28-22 at home, but cashed as seven-point underdogs as head coach Nick Sirianni elected to go for two, down 28-20 following a fourth-quarter touchdown. A failed conversion would've led to a cover for the Buccaneers. There was no other score in the final half of the fourth quarter, so UNDER bettors were able to hang on for the winning ticket.

The Buccaneers got off to a slow start in the final regular-season game against the visiting Carolina Panthers, but ended up winning 41-17 as 10.5-point favorites. Tampa won its final three games, all against non-playoff teams. The Bucs did win its most recent game against the Buffalo Bills, winning 33-27 in overtime, while covering a 3.5-point number as the OVER cashed. The Bucs were 4-1 SU and 1-4 ATS in five games against teams in the current playoff field, with the OVER going 3-2 in those five outings.

Philadelphia covered in its game at home in Week 6 against Tampa Bay, covering thanks to a late two-point conversion to lose 28-22 in a Thursday night game. More important than Philly's playoff trends is head-to-head vs. Tampa, as well as the performance of the Eagles against postseason teams, which isn't very good.

The Buccaneers played one game at 'home' last season in its run to the Super Bowl title. That came in the Super Bowl, as the Bucs blasted Kansas City 31-9 at Raymond James Stadium to become the first champion to ever win on its home field. Tampa Bay went 3-0 SU/2-1 ATS last season while the OVER went 2-1 in three road playoff games to get to the big game.

Tampa Bay lost WR Chris Godwin to a season-ending injury, and WR Antonio Brown lost his marbles and waved good-bye in Week 17. But the Bucs might be getting some huge pieces back from the reserve/Injured list. LB Lavonte David and RB Leonard Fournette were designated to return, and have been practicing with the team. However, they're each considered as game-time decisions vs. Philly. Shaquil Barrett and Jason Pierre-Paul are making their way back from injuries, and their return looks a lot more promising. One thing is for certain, WR Cyril Grayson and RB Ronald Jones II have been ruled out. 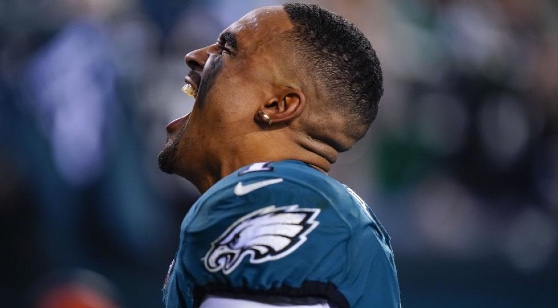 INSIDE THE STATS - PHILADELPHIA EAGLES

INSIDE THE STATS - TAMPA BAY BUCCANEERS

Predicting a straight-up winner in this one is easy. QB Tom Brady isn't going to lose in a quarterback battle against a one-dimensional QB Jalen Hurts. The Bucs rank No. 1 against the run, allowing just 80.6 yards per game. Hurts will have to pass to beat the Bucs, and it's just not going to happen. And it isn't all Hurts' fault, either. The team has had success running the ball, and that's because he really has just one legit NFL WR DeVonta Smith, and a solid target in TE Dallas Goedert. And he really hasn't jelled very well with Goedert. It's run or bust, and it's gonna be bust for Philly.

I don't know if the Bucs have the tools this season to go all the way again. They'd probably be my second or third pick to represent the NFC this season, as the injuries and lack of depth compared to last season is stark. But they're a much better team than Philadelphia. It proved that in Week 6, and it will prove it again on Sunday afternoon.