In the main event of UFC Fight Night: Overeem vs. Volkov, two heavyweights will clash in a 5-round bout to determine the division’s #2.

Alistair Overeem, the seasoned veteran, will most likely look to take the Russian Alexander Volkov into deep waters and win in the championship rounds, whereas his opponent, Volkov, will look for an early KO.

This is a fight where I see Overeem having the space to grapple and clinch, something that will favor him going into the later rounds. While technically sound on the feet, Volkov does not possess that first-round KO power as Francis Ngannou or Jairzinho Rozenstruik, so I think Overeem’s veteran experience will earn him this win. 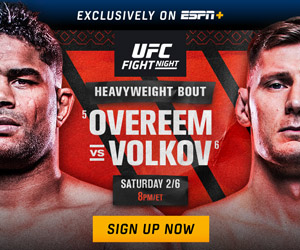 In the co-main event of UFC Fight Night: Overeem vs. Volkov we’ve got another veteran-vs-prospect-bout on our hands.

Outside of a first-round submission loss to Aljamain Sterling in 2020, Sandhagen has remained unbeaten in the UFC octagon and scored a devastating second-round KO destruction of Marlon Moraes the last time we saw him compete.

While Edgar got the W in his bantamweight debut, I feel like his home is still at featherweight, and jumping divisions at this point in his career seems like a desperation sign. Sandhagen isn’t even at the peak of his career yet and is already producing fight-of-the-night-worthy finishes over top-ranked opponents in his division.

Edgar might get the youngster down, but the bigger man will scramble back to his feet as we’ve seen him do before.

Watch all of your UFC Fight Night action on ESPN+

Pantoja vs. Kape in the UFC flyweight division.

Both fighters have shown that they can compete at a high level of MMA, but one more so than the other. This will be Kape’s UFC debut, and fighting established Alexandre Pantoja isn’t exactly the best matchup you could ask for.

Pantoja is 6-3 in the UFC, losing only to top competition such as Deiveson Figueiredo and unbeaten Askar Askarov.

I really don’t see Manel Kape being able to hang with Pantoja, who is the more proven fighter in every way. His well-roundedness also makes him one of the top guys in the flyweight division.

With a pro record of 11 wins and 1 defeat, Askar is not one to lose frequently. He will face Stamann on less than a week's notice. Askar is 26 years old.

Stamann’s gameplan is always clear: get a hold of the legs and drag the fight to the mat. Askar will have to keep the fight on the feet and find success there.

In my book, the wrestler will always have the advantage over the striker, and I don’t think this fight will go against that narrative.

Askar has been taken down before in fights, and Stamann’s strength is something to behold, even at the smaller weight classes.

This is a rematch between two very established fighters in the UFC lightweight division. Since their last fight in 2014, Beneil has made the walk 14 times, amassing a 10-3-1 record. Diego, on the other hand, has fought 7 times since the first meeting, losing only to top contender Dustin Poirier, thereby giving him a combined record of 6-1.

While Ferreira has looked beyond impressive as of late, recently scoring a slick second-round submission over Anthony Pettis, Dariush one the first fight easily, so I can’t pick against him in the rematch.