We had a chat with two-time F1 World Champion Emerson Fittipaldi, ahead of the US Grand Prix in Austin. The Brazilian talked about Max Verstappen winning two championships in a row, Lewis Hamilton's season, Pietro Fittipaldi testing for Haas and more.

Two world titles for Max Verstappen. He joins an illustrious company, one that you’re part of. Do you think it is harder to win two world championships today or was it harder in your era?

"I think winning any World Championship in any era is difficult."

"Whatever era of Formula 1, the competition is always difficult and there's always pressure. So, winning two World Championships is very difficult."

"Winning the second World Championship, for the driver, is satisfying and it is a confirmation of talent, of dedication."

Do you think the two world championships that Max has won are tarnished a bit by that Abu Dhabi race and now Red Bull going over the budget cap?

"No. Absolutely nothing to do with Max."

"He won most of the races in the last championship and this year he was fantastic on his way to the championship."

"What happened in Abu Dhabi had nothing to do with Max's talent and he deserved to be world champion. And this year is exactly the same."

"Max showed the performance, showed his talent, showed that under pressure he doesn't wither. He showed that he is a World Champion."

"When you're starting a new year as defending World Champion, there is a lot of pressure. And he dealt with that very well."

Has this been a season of learning for Lewis Hamilton?

"I think Lewis has taught us, more than him learning, because at the beginning of the year, he must have been extremely disappointed as an athlete to not have all the tools to perform and compete for the World Championship."

"It would have been very frustrating for him being a seven-time World Champion, to be in that position"

"And he fought in every race, for every second, every month."

"And then he kept getting better, better and better up to the point that Mercedes are in now."

"His determination, his talent, his attitude of working hard, it is very impressive."

"Mercedes' recovery has been impressive."

Expectations from Ferrari in Austin?

"I am going to Austin, the next Grand Prix. I'm very excited about it. It'll be a very tough Grand Prix."

"I'm sure Ferrari will do a good job over there."

"Ferrari will try to get their show together. In my opinion, they will be extremely competitive there."

"They'll be trying to beat Red Bull there, more than ever, because of what happened in Japan, what happened during the year. It'll be like revenge for Ferrari to win at Austin."

"It is a very important race for Ferrari, it being the US. They have a lot of clients there."

"To win the US Grand Prix will be a bonus for the Ferrari group, not just the racing division."

How does Charles LeClerc improve in the remainder of the season?

"I think LeClerc is getting more experience with every race."

"Under the circumstances, braking through the chicane, the last corner, last lap just before the finishing line. But with that mistake, Checo Perez is now second in the championship and Verstappen was confirmed World Champion."

"There will be more pressure on Charles LeClerc for the US Grand Prix. That's going to be tough for him for sure. He's under tremendous pressure."

What should be Checo Perez’s target now?

"I think Checo's target is to try to be running with Max Verstappen."

"Sometimes he's run ahead of Max this year."

"He's looking forward to having a good result in America and then prepare for the race in Mexico City at Autódromo Hermanos Rodríguez, where all of Mexico will be watching him."

"That will be a challenge for him for sure."

How does Carlos Sainz get over what has been a disappointing season for him?

"The experience that Carlos is going through this year, it's going to help him at the end of the season and next year for sure."

"He's very fast. He can be extremely competitive. He made some mistakes but it is life."

"He could be very good at the end of this year and next year."

"It's a very good decision. He's in a very good team under Franz Tost. It is a very special team. They love racing."

"He was very impressive in his race with Williams and I'm sure he'll be looking towards racing with AlphaTauri next season."

"I'm sure he's going to be looking for good results. No doubt about it."

Williams has a vacant seat for next season and Mick Schumacher could be an option. Do you think he would be a good addition to Williams?

"I think we are missing more teams in F1."

"For sure, Mick Schumacher could be on a better team because Williams are getting better. They have the potential to improve."

"It could be a very good team for Mick for the future if that happened because the team is ready to go to the next level very soon."

Your grandson Pietro will be doing practice runs for Haas in Mexico and Abu Dhabi. What do you want to see and expect from him?

"I think Pietro, it is good for his career to keep testing. He's very fast. He's a very talented driver."

"And testing will help him show his talent. He's been driving and practicing very good. I'm very happy."

"He's going to give information to the team and that will help them in improving the car."

"I'm sure Kevin will support Pietro for sure."

"To have someone like Magnussen next to you for help is great. I'm sure Pietro will be very excited for the opportunity."

"And we need more F1 teams for these young talents - more seats and more opportunities available."

Niko Hulkenberg is a strong candidate for Haas. Do you think he would be a good teammate for Kevin Magnussen?

"I think he's normally been underestimated. That's my personal opinion."

"For sure. He is a great ambassador for F1. Extremely talented. Very good personality."

"We need more personalities like Ricciardo. He's a great family man. I love talking to him through McLaren." 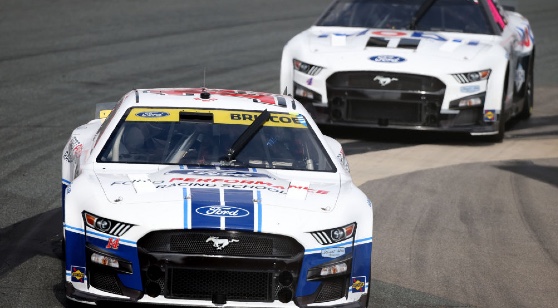