One of the cheap thrills I get weekly is surveying over the weekly NASCAR odds offered by the Westgate Las Vegas SuperBook which usually come out on Mondays. This week I couldn’t believe my eyes when Superbook manager Ed Salmons posted eight drivers at odds of 8/1 or less to win Sunday’s Instacart 500 at Phoenix Raceway.

Despite all the versatility of improbable winners that have happened in the first four races, in what might as well be the greatest season ever as advertised by NASCAR, the SuperBook is telling us only eight drivers can win this week and if you don’t believe them they’re baiting you to take William Byron or Alex Bowman both at 30/1 odds.

The SuperBook favorites go like this starting with three drivers as co-favorites at 5/1 odds with Brad Keselowski, Chase Elliott, and Kevin Harvick.

Martin Truex Jr. and Kyle Busch are both at 8/1 odds to win.

Salmons says his theoretic hold percentage starts at 25% and gets closer to 20% by race day.

We were in a fantasy NASCAR league together with a bunch of other Las Vegas bookmakers in the 1990s and we’ve argued over countless topics over the years and each one is uniquely different and hilarious. He used to also bet the NASCAR props I offered at my sportsbooks and did quite well -- he won more than he lost. His protege at the time, Matt Metcalf who is now director of the brand new Circa Sports operation, used to ding me in driver matchups too.

So I’ll just say I respect both of their opinions over the years and we usually have the same take reflected in the odds, but this week was different. The SuperBook had eight drivers with short odds, which is highly unusual.

On Tuesday, I checked out what William Hill sportsbooks were offering.

Their NASCAR oddsmaker Adam Pullen is a long-time friend of mine as well and they had the same eight drivers at 8/1 odds or less with Harvick listed as the lone favorite at 9/2.

But the more I thought about it while reviewing all the past data the only thing I would have changed in my odds offering would be Chase Elliott as the clear 4/1 favorite.

As of Wednesday afternoon, Metcalf hadn’t posted his odds at Circa Sports, but I’m sure it will be something similar with an 18% hold as usual. 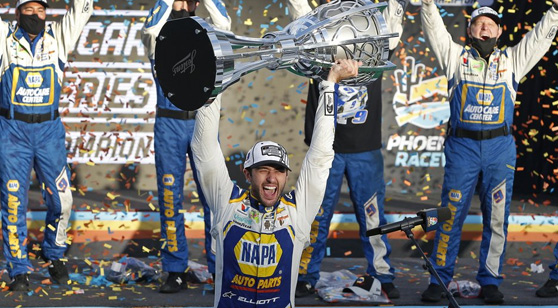 Chase Elliott will make his return to Phoenix on Sunday, which is where he captured the 2020 NASCAR Cup title. (AP)

So what’s up with the favorites being so short?

How about we do a little exercise to find out why and go back to Phoenix last spring, the last race run before the 2020 shutdown when we didn’t know how awful the pandemic would be.

And then let’s take a look at the race package with engines producing 750 horsepower, a span of 13 races in 2020, and also one race in February at the Daytona road course.

It’s a shortlist of winners beginning with Elliott who won five times with it, and the races he didn’t win or finish poorly he led the most laps like the Daytona road course when he finished 21st but led a race-high 44 laps.

Then there’s Harvick winning two of his nine 2020 trophies using it (Dover, Bristol), while also being Phoenix Raceway’s all-time leader in just about every category such as wins (9), top-fives (18), and laps led (1,668).

Keselowski won three times with it last season - Bristol, New Hampshire, and Richmond, the latter two winning set-ups that are key to being successful at the relatively flat 1-mile layout at Phoenix. He’s never won a Cup race at Phoenix but does have two Xfinity Series wins. He was fifth at the Daytona road course.

Team Penske shows they’re strong throughout with Logano winning at Phoenix last spring (led 60 laps) and finishing third in the season finale at Phoenix (led 125 laps). Same story as Keselowski at the Daytona course, except Logano was runner-up. Both these drivers closed out 2020 strong with this race package. Logano has finished third or better in his last four races using it.

And the final heavyweight to the 750 HP dance party is Joe Gibbs Racing with a trio of drivers combining to win three of the 14 races. Truex won at Martinsville in June leading 125 laps (Logano led 234, finished 4th), Hamlin won at Dover, and was runner-up at New Hampshire and the first Dover race. He was third on the Daytona road course, a race in which his new teammate Christopher Bell grabbed his first Cup win and paid out bettors 80/1 odds.

That’s it. The sportsbooks are correct and proper with eight drivers at single-digit odds.

How about Penske’s other driver Ryan Blaney who was sixth in the season finale at Phoenix last season. William Hill has him 17/1, the SuperBook has him 16/1. Blaney has two top-fives at Phoenix but probably should have four.

Larson is an interesting look with this race package because the only Hendrick driver doing great things with it is Elliott. Bowman and Byron haven’t had the same success. Larson took over the No. 48 Jimmie Johnson equipment. Johnson’s best chance to win a race in his final season came with the superspeedway or the 750 HP package -- he was fifth at Phoenix last fall. Larson has five top-fives in 13 Cup starts at Phoenix.

Kyle Busch was the only Gibbs driver to not win in the last 14 races with the 750 HP package. He has a new crew chief this season, but they did win the non-points Busch Clash on the Daytona road course together to kick off the season. The reason you might bet on Busch this week is that he has three Cup wins, 10 Xfinity Series wins, and two Truck Series wins at Phoenix.

Maybe we can suggest Blaney joins the party, but just like the books, it’s hard to imagine any other driver than the eight single-digit favorites winning Sunday at Phoenix.

Kevin Harvick on whether his past success at Phoenix still holds weight: