The 2021 NBA Draft is the 75th edition of the event, and will air on July 29, 2021 from the Barclays Center in Brooklyn, New York. The Detroit Pistons have this year's first overall pick, followed by the Houston Rockets and the Cleveland Cavaliers to round out the top three. 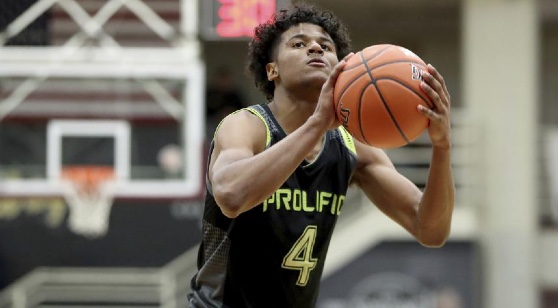 Jalen Green is a Top 5 projected pick in the NBA Draft, and considered one of the best underdogs to be taken No. 1 overall. (AP)

Despite Oklahoma State’s Cade Cunningham (-8000) coming in as the overwhelming favorite to be the first selection in this year’s NBA Draft, the odds for picks 2-4 appear to be a little cluttered – with Jalen Green (-170), Evan Mobley (+170), and Jalen Suggs (+650) all listed at reasonable odds to be selected second in Thursday’s event.

I’ll take the long shot in Suggs to be selected second here, as the Rockets already possess a young centerpiece in their front court in Christian Wood – so, Houston’s pick will most likely come down to a toss-up between the pair of remaining guards slated in the top four.

Behind Cunningham, Mobley appears to be the safest option on the board entering Thursday’s event – considering the seven-footer from USC evidently possesses both the offensive and defensive skill set to be a solid two-way contributor at the highest level for quite some time.

Unfortunately for the Rockets though, they don’t really need Mobley – and I expect them to pass on him at the second spot.

The Cavaliers, on the other hand, seem to be the ideal fit for the former Trojan – considering Collin Sexton desperately needs a dynamic partner in crime to run pick-and-roll with. I’ll lock Mobley into the third slot here – as I’m really banking on the big man falling to Cleveland at three due to Houston’s volatile needs at the guard position.

In my opinion, Corey Kispert may be the most interesting prospect entering this year’s draft, considering the former Gonzaga Bulldog is widely regarded as the most dangerous shooting threat in his class and an adequate defender – yet most boards still project him going in the middle of the first-round (13-15).

It’s a bit of a long shot – but I’m going to back Kispert to get drafted top 10 here, as I think there might be a couple of teams willing to make a desperate reach and grab a shooter of his caliber at the 10th spot.

Last year’s Wooden Award winner and AP Player of the Year, Luka Garza, has hopes of being one of the final selections in Thursday’s NBA draft – and after posting one last monster campaign to wrap up his remarkable four-year collegiate tenure (24.1 PTS, 8.7 REB), I think a team will end up giving him that opportunity.

Most of the criticisms surrounding Iowa’s former superstar previously dealt with his growing age and lack of defensive mobility – and while he isn’t getting any younger, it was reported last month Garza had lost over 20 pounds in preparation for the draft, which appears to have settled much of the mobility concerns and opened the door for some late second-round consideration in the weeks leading up to the event.

I’ll back Garza to be selected ahead of the 55-slot here – as despite being 22 years of age, I still think a team will end up taking a gamble on the reigning collegiate POY at a decent stage in the second round.