The two best teams in the Eastern Conference during the regular season last year will meet for the second time in three days on Thursday night.

Toronto went into Milwaukee and knocked off the Bucks, 124-113 as a six-point underdog on Tuesday night. That avenged a 115-108 Bucks' win over the Raptors in late January, setting up the rubber game between these two teams. 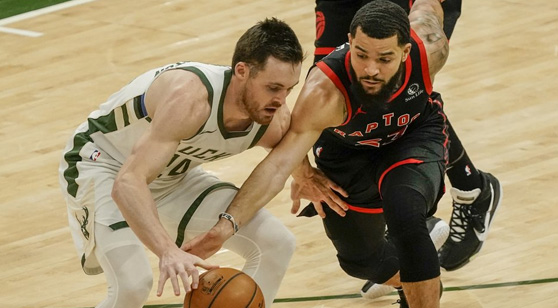 The Raptors will be looking to pull off a two-game road sweep over the Bucks when the pair meet on Thursday. (AP)

Toronto has yet to move above .500 this season. The Raptors are currently 13-15, and the team’s hopes of a sixth straight 50-win season are in the gutter. They lost eight of their first ten games to kick off the campaign, and that put Toronto in a hole it has yet to dig itself out from under.

The Raptors have alternated short spurts of wins and losses over the last month. They have won six of their last nine games, and Fred VanVleet exploded for a season-high 54 points in a win over Orlando back on Groundhog Day. VanVleet didn’t lead the team in scoring again until Tuesday’s win over the Bucks.

VanVleet took over after Kyle Lowry suffered an injury in the third quarter and had to leave the game. He went 12 of 22 and dished out seven assists to lead the Raptors offense in the upset victory. Pascal Siakam had 13 rebounds and six assists, but he went just 8 of 23 from the floor.

Giannis Antetokuonmpo paced the Bucks with 34 points and nearly tallied a triple-double with 10 rebounds and eight assists. Antetokuonmpo went 11 of 20 from the floor against the Raptors, but he also turned the ball over five times. In all, Milwaukee shot 48.2 percent from the floor on Tuesday, but Toronto made 50.5 percent of its field goals.

The Bucks appeared primed to finally kick it into gear last week. Milwaukee had won five straight games to start February, but this team has now lost four in a row ahead of the rematch with Toronto. After a one-point loss to Phoenix last Wednesday, Milwaukee has lost to Utah by 14 points, Oklahoma City by five points, and Toronto by 11 points over the past week.

Lowry is considered questionable to play on Thursday night after leaving the previous game with an ankle injury. Toronto’s veteran point guard is having another solid year, averaging 17.7 PPG while shooting 45/39/87.

Lowry is also putting up 5.4 RPG and 6.4 APG. Given the nature of the injury, it seems likely that the Raptors will give Lowry a little extra rest, so I don’t expect him to play this evening.

Siakam is Toronto’s leading scorer and rebounder this season. The Raptors' forward is averaging 20.6 PPG and 7.8 RPG through 25 games. He has had some difficulty adjusting to the extra attention defenses are giving to him though.

After emerging during the Raptors’ NBA championship run, he has hit just 45 percent of his field goals the last two seasons. Additionally, Siakam is making less than 30 percent of his threes.

VanVleet is averaging 20.4 PPG and 6.6 APG. He isn’t the most efficient shooter, making just 41.7 percent of his field goals and 37.7 percent of his threes, and that has hurt Toronto given Siakam’s struggles too.

Chris Boucher is turning heads though. He leads Toronto with a 23.42 PER in 23.4 MPG. Boucher is averaging almost 53 percent from the floor and over 44 percent from downtown. His shooting efficiency numbers are the best on the Raptors, and he is also pulling down 6.8 RPG.

Milwaukee’s losing streak has coincided with Jrue Holiday’s absence. Holiday has reportedly been sidelined with COVID since last week, and that has limited what the Bucks can do in the backcourt. Donte DiVincenzo is a solid three-point shooter (40.1 percent) that also makes a difference in other areas.

However, Bryn Forbes, Pat Connaughton, and D.J. Augustin don’t provide a lot more than three-point shooting. Of the three, Forbes is the best at 47.1 percent from beyond the arc.

Antetokounmpo is playing at an elite level, knocking down 56.3 percent of his field goals while averaging 28.2 PPG and 11.4 RPG. He is one of the most well-rounded players in the league, but his touch continues to fail him at the free throw line as his performance at the line has plunged since last year.

Additionally, he continues to shoot poorly from beyond the arc, and he hasn’t made more than 30.7 percent of his treys in each of the last seven seasons. At this point, Antetokounmpo might be best served by eschewing the perimeter game and building more bulk for the interior.

Khris Middleton continues to thrive in a complementary role, and he is talented enough to lead the team for stretches with Antetokounmpo on the bench. He is averaging over 20 PPG while shooting 51/44/90, highlighting his efficiency. Middleton might not get to the line as often as he should, but he is still averaging 5.8 RPG and 5.8 APG to make Milwaukee dangerous.

The Bucks have the second-best offense in the game, averaging 120.5 PPG. Milwaukee does an excellent job on the glass with 55 RPG, and this team is second in the NBA in effective field goal percentage at 57.4 percent.

Milwaukee has a serious edge on the boards. The Bucks are one of the best rebounding teams in the league, while the Raptors are one of the worst. That will give Milwaukee some extra possessions on Thursday.

Given Toronto is having a tough time from the floor too, look for the Bucks to quickly brush off the setback with a win over the Raptors.