Primetime NBA action is back on ESPN this Saturday with the stage set for a highly anticipated rematch of last year’s NBA Finals between the Los Angeles Lakers and Miami Heat.

So, VI has you covered with a variety of betting resources to help handicap the top matchup on the evening’s slate.

The Lakers head into this contest as a 3.5-point favorite, marking the 15th consecutive game that Los Angeles have been favored by three points or more in.

While the total for Saturday’s matchup opened at 214.5, it currently sits at OU 212 – which is the lowest ‘over-under’ set for a Lakers game so far this year. 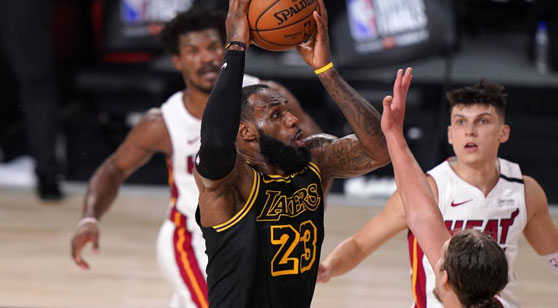 LeBron James and the Lakers meet up with the Heat in an NBA Finals rematch on Saturday night. (AP)

The Lakers came into their matchup with the Nuggets this past Sunday riding a seven-game winning streak, but the injury to Anthony Davis appears to have thrown LA slightly off its rhythm – having now lost two of their last three games while being favored in all those matchups.

LeBron James racked up 32 points on 14-23 from the field during the Lakers most recent contest against the Nets, but it still wasn’t enough to hold off Brooklyn’s 18-39 from three-point territory in another loss for LA without half of its superstar duo.

On the other side of things, the Heat snapped a 3-game losing streak with a win over the Kings in their most recent affair – propelled by a combined 47 points on 63% shooting from Duncan Robinson and Tyler Herro in an 8-point victory for Miami.

All games played at NBA Bubble in Orlando, Florida

The Lakers won both regular season matchups against the Heat last year – with one matchup clearing the set total for Saturday’s contest by nearly 10 points (113-110), and the other staying well under that number with just 175 total points being scored in it. (95-80).

While the most recent matchups between these teams came during last year’s NBA Finals, which resulted in a six-game series win for the Lakers – highlighted by King James capturing his fourth Finals MVP award.

The Heat come into Saturday’s contest having lost SU and ATS in three out of their last four matchups, with their only victory across that stretch coming against the Kings in their most recent affair.

The ‘under’ has been a solid bet in Miami games so far this year, staying ‘under’ the number in 18 out of 29 matches so far this year. An ‘over’ in the Heat’s most recent matchup against the Kings though, makes ‘over’ bettors 2-0 in Miami’s last two games.

Although the Lakers currently own the second-best record in the league at 22-8, they have also managed to tally a record of 14-16 against the spread – which ranks 19th in that department so far this season.

The total had gone over in five straight Lakers games prior to AD’s injury, but now ‘under’ tickets have cashed in back-to-back games to kickoff what is expected to be a lengthy absence for the All-Pro forward.

Lakers coach, Frank Vogel, mentioned on Thursday that Davis could miss up to four weeks with the calf injury that he suffered during LAL’s loss to the Nuggets back on Valentine’s Day.

Look for Kyle Kuzma to continue in his expanded role in the rotation until AD is able return to action.

Bam Adebayo racked up 16 points, 12 rebounds, and 10 assists for a monster triple-double in Miami’s victory over the Kings this past Thursday – now giving him 20 or more points in four of his last eight games, while accumulating 15 or more rebounds + assists in five of those appearances.

I’ll back Bam to go ‘over’ his hustle stats number again here in a favorable matchup against the Lakers without Davis in the lineup.

The Heat come into Saturday’s NBA Finals rematch heading down the homestretch of a grueling seven-game road trip that they have been relatively unsuccessful on so far – having lost three of their last five games now, with two more remaining on the schedule before returning home for a while.

One of Miami’s biggest issues during last year’s championship was their inability to generate offense in half-court sets.

Without the defensive presence of Davis though, Adebayo requires much more attention from Los Angeles defenders at that end of the floor, consequently freeing up the other parts of Miami’s lineup. I’ll take the Heat with the points in a revenge game here.