So, VI is getting you ready with a variety of in-depth previews to help handicap all the evening’s top matchups.

The Lakers come into this matchup as five-point favorites – marking the third consecutive game that the Blazers have been listed as an ‘underdog’ in.

While the total for Friday’s contest currently sits at an 'over-under' price of 222, which is the lowest total set for an event containing Portland since they squared off with the Magic back on Feb. 9 (U 220). 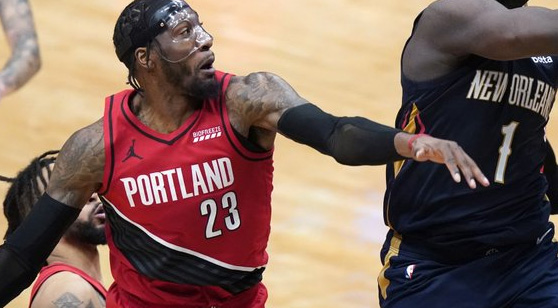 The Trail Blazers will be looking to snap a season-high three-game losing streak on Friday when they visit Los Angeles. (AP)

The Trail Blazers head into Friday’s event riding a three-game losing streak, with their most recent victory coming against the Pelicans back on February 17th – which was a contest that Portland required every bit of Damian Lillard’s 43-point, 16-assist performance in order to escape with a 2-point victory.

Portland’s most recent matchup resulted in a competitive loss to the Nuggets, as 41 points on 53.1% shooting from Nikola Jokic was just enough to push Denver to the edge against the Blazers (111-106).

Los Angeles is also coming into this matchup in the midst of a losing skid – having lost four of the past five games, with their only victory across that stretch coming in a relatively close contest against the Timberwolves (112-108).

The Lakers were ridiculed by the Jazz in a blowout loss during their most recent affair – with 6 different Utah players registering 12 or more points in a 25-point victory for the Jazz.

Portland and Los Angeles have split their last four regular season matchups, with the lowest combined scoring output by these teams across that stint coming during LA’s 117-105 victory back in December (Under 229).

More notably though, the Blazers and Lakers hooked up during the first round of last year’s postseason – which resulted in a five-game series advancement for the Lakers, as Portland’s Game 1 victory ended up serving as just a small road-bump on LA’s path to the Finals.

Prior to the Blazers current three-game losing skid, Portland had won six straight games – with half those victories coming in matchups that Lillard and company were listed as ‘underdogs’ in (PHI, DAL, NO).

Despite the absences of several Portland rotational pieces, Lillard is having another magnificent season in all aspects of the game – averaging 29.6 points and eight assists per game on 44.7% from the floor throughout his current campaign.

Including LA’s Valentine’s Day matchup with the Nuggets that Anthony Davis exited with a calf injury in, the Lakers have now lost five of six games since the absence of their superstar forward – despite being favored in all those contests except one (-8.5 UTA).

The ‘under’ has also been successful in four of six matchups since AD’s injury, but that pretty much lines up with how the Lakers season has gone so far this year – having stayed below the total in 21 of their 33 contests since taking home last season’s Larry O’Brien Trophy.

Los Angeles has possessed a rotating door in its starting lineup ever since the start of their injury concerns – with Kyle Kuzma, Wesley Matthews, and Talen-Horton Tucker all getting spot-starts since the midway mark of February.

Montrezl Harrell has been the one picking up the majority of AD’s slack down low though, registering 15 or more points and 6 or more rebounds in all but one of LA’s matchups since Davis last suited up.

With all the injuries currently polluting Portland’s rotation, Derrick Jones Jr. has been one of the guys that has naturally assumed an expanded scoring role for the Blazers – tallying 11 or more points in four of his last five games, with his lowest output across that span being his 8-point performance during Portland’s blowout loss to the Suns this past Monday.

I’ll ride the hot hand with Jones Jr. here and back him to crack double-digit scoring again on Friday night.

Despite having lost five of six games since the injury to Davis, the Lakers still sit in third place in the Western Conference with a record of 22-11 and have finally drawn a favorable matchup in the Blazers, who possess injury concerns of a similar magnitude to Los Angeles heading into Friday night.

I’ll back the defending champs to be the squad that snaps its losing streak here, as I can’t imagine LA continuing to lose games at the rate they currently are, even without AD in the lineup.