Non-conference NBA action will resume on Friday night with the Knicks set to host the Mavericks during the first matchup on NBATV’s nationally televised slate. So, VI is getting you ready with a variety of betting resources to help handicap all the evening’s top contests.

Dallas heads into Friday’s matchup as a 5.5-point road favorite over the Knicks – marking just the second time the Mavericks have been favored across their last five contests. While the total for this event currently sits at OU 213.5, which is the lowest over-under set for a game containing Dallas so far this season. 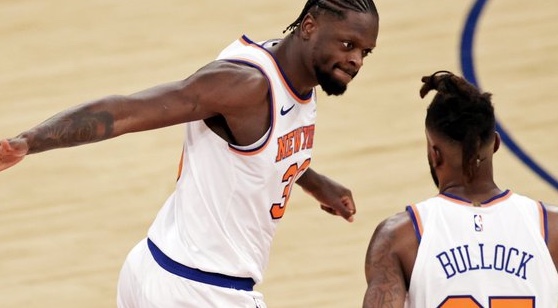 Julius Randle and the New York Knicks are making a push for the postseason, as Randle now leads the Most Improved Player market. (AP)

The Knicks come into Friday’s contest following back-to-back losses – with New York’s most recent victory coming in a matchup against the Bucks, which was an event Giannis Antetokounmpo, Khris Middleton, and Jrue Holiday all did not participate in.

New York was defeated by Minnesota in its most recent affair, as Julius Randle and RJ Barrett both missed shots in the closing moments of the contest to seal a one-point victory for the Wolves. Contrarily, Dallas heads into Friday’s contest boasting wins in back-to-back contests, while also managing to cover the spread in both of those events.

The Mavericks most recent matchup resulted in a five-point win over Boston – as Luka Doncic racked up 36 points on 11-15 from the field, with all four his misses in the contest coming from long-range.

New York won two closely contested matchups against Dallas during last year’s regular season – with both of those meetings taking place prior to the NBA’s shutdown due to the global pandemic. Doncic averaged 34 points per game on 47% from the field against the Knicks last year.

Unfortunately for Dallas though, Luka didn’t receive much help from his supporting cast in either of those contests, as the Mavericks shot 22-64 from beyond the three-point line across both matchups.

Both meetings between New York and Dallas during last year’s regular season stayed under the total set for Friday’s affair (OU 213.5) – with the previous two matchups between these teams containing an average of 208.5 points scored in them.

Despite being listed as an underdog in over a third of their last 20 matchups, the Mavericks are 13-7 SU across that most recent stretch of games –which includes victories over the Celtics, Blazers, Clippers, Nuggets, and Nets during that timeframe.

Playing the ‘under’ has been a profitable trend in matchups containing Dallas this year, with the ‘over’ currently sitting at a 20-26 clip during the Mavericks 2020-21 campaign so far – which ranks 25th across the league in that department. That trend remained prevalent throughout March too – considering the total stayed under in 10 of 14 Mavericks games last month.

The Knicks have been one of the pleasant surprises coming out of the league this year – with New York currently sitting in sixth place in the Eastern Conference standings with a SU record of 24-24, while also ranking sixth in the NBA ATS at 27-20-1.

The ‘under’ has also been a consistent play in Knicks games this year – with the total going over the number in just 37.5% of New York’s matchups so far, which ranks 29th across the league in that department.

New York hasn’t shown any indication of ramping up its pace of play in the near future either, considering the under has now cashed in seven of the last eight Knicks games – with the total for only two of those matchups being set above 220.

Doncic has been doing a good portion of his scoring from beyond the three-point lately – having attempted nine or more three-pointers in 11 consecutive outings, while knocking down four or more of those attempts in seven of those contests. I’ll back Luka to keep it going with the long ball against the Knicks on Friday night.

The Mavericks come into this contest having won and covered the spread in each of their last two games – with Dallas’ most recent loss coming in a matchup that Doncic and Porzingis both did not participate in. While the Knicks head into this matchup as losers in each of their last two games – which includes ugly losses to the Timberwolves and Heat during that timeframe.

I’ll lay the points with Dallas here, as I expect the Knicks to have a difficult time matching the Mavericks’ three-point shooting in this contest – especially if Barrett forced to sit out.