The Dallas Mavericks (29-24) take on the Memphis Grizzlies (27-25) at FedEx Forum on Wednesday at 9:30 p.m. ET in a battle between the top two teams in the NBA's Southwest Division on ESPN.

The Mavs slink into this one on a two-game losing streak, going 1-3 SU/ATS across the past four. They were pounded 113-95 at home by the Philadelphia 76ers. The Grizzlies rolled to a 101-90 win against the Chicago Bulls as 2.5-point favorites on Monday.

The Mavericks are slight favorites on the road against the Grizzlies, despite the fact Memphis has won five of the past seven games overall. The last time these teams faced each other Feb. 22 in Dallas it was a Mavericks 102-92 victory as 4.5-point favorites as the UNDER (231.5) connected.

The total is set for 226.5. The Grizz hit the UNDER last time out, snapping a 4-0 Over run from April 6-11. For the Mavs, they hit the UNDER against the 76ers, and the UNDER has cashed in seven of the previous nine outings. 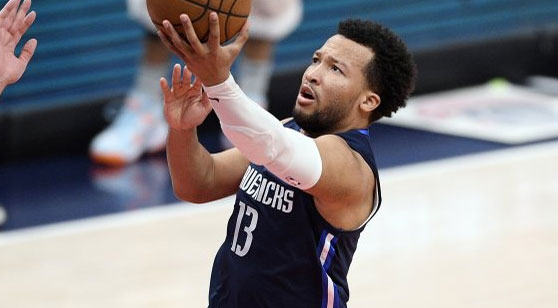 The Mavericks hit the road to Memphis following consecutive home losses to the Spurs and 76ers. (AP)

The Mavericks were pounded 113-95 at home against Philadelphia, failing to come close to covering a 3.5-point number as the UNDER (218.5) connected. They comes on the heels of a 119-117 setback against the San Antonio Spurs the day before, a rare OVER (220). They're still just 1-3 SU/ATS across the past four, with the lone win over the Milwaukee Bucks on April 8.

The Grizzlies pushed past the Chicago Bulls by a 101-90 score as 2.5-point favorites as the UNDER (228.5) came through. That slapped the brakes on a two-game losing skid which saw Memphis average 127.0 PPG, but they allowed 132.5 PPG in the two losses, both OVER results.

Memphis will be facing a Western Conference opponent for the first time in seven games. They belted the Minnesota Timberwolves by a 120-108 count as 6.5-point favorites as the UNDER (232.5) connected on April 2.

Dallas has dropped its past two against Western foes, losing at home to San Antonio and at Houston on April 7. However, their most impressive win in a while came April 5 when they pushed past the Utah Jazz 111-103.

The Mavericks topped the Grizzlies on Feb. 22 as a 4.5-point favorite as the UNDER (231.5) connected in the first meeting at American Airlines Center in Dallas.

Tim Hardaway Jr. registered a team-best 29 points with seven rebounds, three assists and a steal in his 28 minutes off the bench. Luka Doncic hit blackjack with 21 points, seven boards and five dimes while hitting three triples across 33 minutes.

Jonas Valanciunas went for 11 points, 15 rebounds and a blocked shot in his 30 minutes while hitting just 5-of-18 field-goal attempts. Ja Morant added 22 points with nine assists while hitting 10-of-21 from the field in 34 minutes.

Dallas had been enjoying a five-game win and cover streak from March 29-April 5 before their recent 1-3 SU/ATS skid across the past four. While they have been a bit erratic lately, total bettors have cashed plenty of winners at the window.

The Mavericks have connected in six of the past eight games against the spread, while going 5-1 ATS in the past six road games as a favorite. They're also 4-1 ATS in the previous five against teams with a winning overall record.

The Grizzlies turned things around last time out against the Bulls, covering a 2.5-point number as the UNDER cashed. Overall they're 5-2 SU/ATS across the past seven games while the OVER has hit in four of the past five overall.

The Grizz have covered in five of the past six at home in Grind City, while cashing in 11 of the past 14 games overall. Memphis is also 4-1 ATS in the past five at home as an underdog.

It's all about Hump Day for the Grizzlies, as they are 8-0 ATS in their past eight games on Wednesdays. They're also 4-0 ATS in the past four overall against teams with a winning overall mark.