Western Conference NBA action will resume on Monday night with the Lakers set to host the Jazz during the final matchup on ESPN’s nationally televised slate.

Utah enters Monday’s contest as a 5.5-point favorite over the homestanding Lakers – marking the seventh time Los Angeles has been listed as an underdog since the beginning of April.

The total for this event currently sits at OU 214.5, which is just the sixth time that the over-under for a Jazz game has been set below 220 since the conclusion of January. 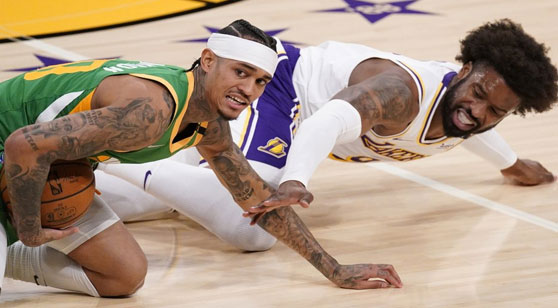 The Jazz and Lakers finish off their two-game series on Monday night at Staples Center. (AP)

Prior to the matchup between these teams on Saturday night, the Jazz had won four of their last five contests – with Utah’s only loss across that span coming in a non-conference matchup against Washington.

Donovan Mitchell exited Utah’s matchup against the Pacers on Friday with an ankle injury. The Jazz still managed to pull out an 8-point victory in that contest though – as Bojan Bogdanovic took over for Utah with 24 points on 9-16 from the field during the win.

The Jazz’ latest affair resulted in an overtime loss to the Lakers – as Rudy Gobert and Mike Conley joined Mitchell on the sidelines while the rest of Utah’s rotation was left to battle it out against the remnants of L.A.’s lineup.

On the other hand, the Lakers head into Sunday following wins in three of their last five games, despite being favored in just two of the matchups during that timeframe (Charlotte, Utah).

Los Angeles won all three of its regular season matchups against the Jazz last season – with two of those creating a split on opposing sides of the over-under set for Monday’s affair, and one ringing in right around that number (OU 214.5).

The first matchup between these teams took place back in February of this year, which resulted in a 25-point win for the Jazz, as six different Utah players eclipsed double-digit scoring in the blowout victory.

The most recent affair between Utah and L.A. was an overtime matchup that took place this past Saturday though – as the Jazz seemed to run out of steam in the contest’s extra stanza during the absences of Gobert, Conley, and Mitchell.

The Jazz currently own the best record across the entire NBA at 42-15, while also managing to maintain the fifth highest clip against the spread at 33-24 – only trailing the Suns, Grizzlies, Knicks, and Clippers in that department.

Utah has consistently leaned towards the ‘under’ for most of the current season, as this year’s Jazz team has become notorious for falling into defensive battles – compared to last year’s squad that finished at a 43-36 over-under clip.

Make note though, the total has now gone 'over' in three of the last five Jazz games – which includes their high-scoring affair with L.A. on Saturday night.

Expectations have been low in Los Angeles lately, with LeBron James and Anthony Davis both currently sidelined due to injuries. Things are starting to look up for the Lakers though, considering Davis is gearing up for a return any day now.

Fortunately for the Jazz, Monday won’t be that day – considering AD has already been ruled out for the Lakers matchup against Utah.

Even with the extended absences of their superstars, the Lakers haven’t played that bad over their latest stretch of games. Los Angeles heads into Monday’s matchup owning records of 4-3 SU and 5-2 ATS across their last seven contests – despite being favored in just three of those events.

Riding the ‘under’ in Lakers’ games has been one of the most profitable betting trends in the league this season – with the over-under currently sitting at a 22-35 clip in matchups containing Los Angeles over the course of their current campaign.

Make note though, the oddsmakers have aggressively scaled down the totals in Lakers’ games recently – which has led to ‘over’ results in six of their last seven contests.

Dennis Schroder had a busy night on offense during that Lakers’ OT victory over Utah on Saturday – pacing Los Angeles with 25 points and eight assists, while also managing to lead his team in field goal attempts over the course of the contest.

Schroder heads into Monday’s affair having scored 19 or more points in three of his last four games – while assisting on six or more baskets in all four of those contests.

I’ll back Schroder to continue his recent high-level of offensive production in another matchup with the Jazz here.

The Lakers may have escaped with an overtime victory during their matchup with Utah this past Saturday, but that was a contest that Mitchell, Conley, and Gobert all did not participate in.

Luckily for Los Angeles, Mitchell has already been ruled out of Monday’s matchup with the ankle injury that he suffered this past Friday against the Pacers.

It appears that Conley and Gobert are gearing up for a return ahead of this contest though – considering they have both been upgraded to probable as of Sunday night.

I’ll lay the points with Utah here, as the return of Conley and Gobert should be enough to push the Jazz over the edge in this matchup.