Milwaukee is having its worst regular season yet under head coach Mike Budenholzer.

The Bucks went 60-22 in his first season and 56-17 last year, but they are just 36-22 going into the final few weeks of the 2020-21 NBA season. They are chasing Brooklyn and Philadelphia in the Eastern Conference standings, and the New York Knicks and Atlanta Hawks aren’t too far behind.

Both of those teams have been performing better than the Bucks over their last ten games, and the Bucks will face the Hawks on Sunday night in Atlanta. 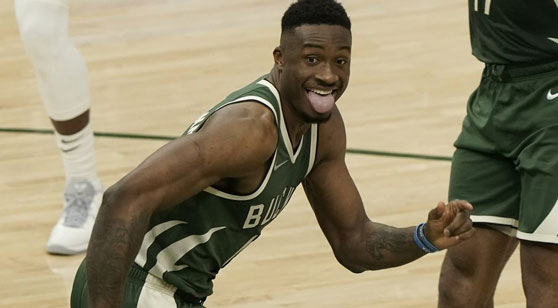 The Bucks look for their third win against the Hawks this season as the two Eastern squads meet up in Atlanta. (AP)

Atlanta was one game under .500 at the start of the month. The Hawks have looked like one of the best teams in the East since that point though with a 10-3 record in April.

Their only three losses have come against the Grizzlies, Bucks, and Knicks, but they have also benefited from a relatively soft schedule. None of their victories in this run have come against a team in the top six in either conference.

The Hawks have yet to beat the Bucks this season. They met in Milwaukee in late January, and the Bucks picked up a 129-115 win despite 30+ points from both John Collins and De’Andre Hunter.

Trae Young and Clint Capela were not available due to injury, but they did play in Atlanta’s 120-109 loss to Milwaukee ten days ago.