Western Conference NBA action will resume on Friday night with the Nuggets set to square off with the Jazz at nine o’clock Eastern Time in Salt Lake City, Utah. So, VI is getting you ready with a variety of betting resources to help handicap all the evening’s top contests.

Utah enters Friday’s contest as a three-point favorite over the visiting Nuggets – marking just the third time Denver has been listed as an underdog since the start of April (20 games). The total for this event currently sits at OU 218.5, which is the third time across Denver’s last four games that the over-under has been set below 220. 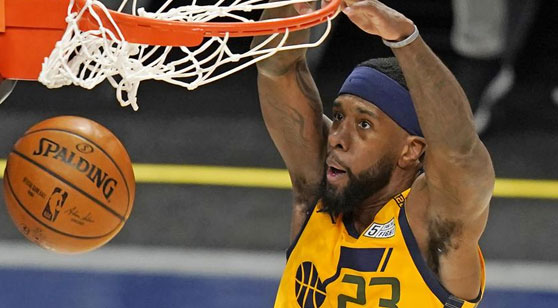 The Jazz and Nuggets have split a pair of matchups this season as the division rivals hook up in Salt Lake City on Friday. (AP)

The Jazz head into Friday following wins in four of their last five games – with their only loss during that timeframe coming in a matchup against the Suns, which was also the only contest Utah was listed as an underdog in across that stretch.

Utah’s latest victories came in a two-game mini-series against the Spurs though – as the Jazz ended up cruising to back-to-back double-digit victories, despite dealing with various injury concerns.

On the flip side, the Nuggets enter Friday’s contest boasting wins in six of their last seven games – with Denver’s only loss across that span coming in a hard-fought matchup against the Lakers, which was an event Nikola Jokic and company shot just 6-of-24 from downtown in.

Similar to Utah, the Nuggets most recent victory also came by a double-digit margin – as Denver toppled the Knicks this past Wednesday behind the Joker’s third consecutive 30-point performance, at another efficient clip (10-16 FGA).

Denver and Utah have split a pair of matchups during this year’s regular season – with the first of those contests comfortably staying under the total set for Friday’s affair in a four-point Jazz win (214 points), and the second cruising over on the way to a double-digit victory for Denver (245 points).

Prior to that though, the most recent meeting between these teams took place during last year’s postseason in the NBA bubble, which was a series the Nuggets escaped with a 4-3 series victory in.

Despite Jamal Murray’s unfortunate season-ending injury, the Nuggets have still managed to gain ground in the Western Conference standings following the loss of their secondary superstar. Part of the reason the gap has narrowed between Denver and the top teams out west can be chalked up to Utah struggling due to Mitchell’s lingering injury.

Some of it can also be attributed to the Nuggets playing solid basketball over their most recent stretch of contests though, considering Denver heads into Monday boasting a record of 16-4 since the start of March, which has brought them within one game of the third-seeded Clippers in the West.

Betting the ‘over’ in Nuggets’ games has played at a pretty profitable rate so far this year – with the total going over at a 35-29 clip in matchups containing Denver this season. Make note though, that trend has fizzled out lately – considering the total has stayed under in seven of the last nine Nuggets’ games.

For the time-being, the Jazz sit atop the Western Conference standings with a record of 47-18. Utah’s crown that it has claimed for the majority of this season is currently in jeopardy though – considering Mitchell has now missed ten straight games, which has allowed Phoenix to pull within a game of Rudy Gobert and company.

Utah has consistently leaned towards the ‘under’ for most of the current season (30-35-1), as this year’s Jazz team has become notorious for falling into defensive battles – compared to last year’s squad that finished at a 43-36 over-under clip.

That trend of low-scoring affairs has picked up steam during Utah’s latest stretch of matchups too, considering the total has stayed under in six of the last nine Jazz’ games.

The Joker currently finds himself at the forefront of this year’s MVP race sitting at -1000 odds, and rightfully so – currently averaging 26.4 points, 10.9 rebounds, and 8.4 assists per game over the course of this season.

Jokic’s MVP-case has become even stronger over Denver’s recent stretch of games too – considering he has now posted 30 or more points in four of his last five outings, with his lowest scoring output during that timeframe coming in a double-digit victory over Toronto that he played less than 30 minutes in.

I’ll back Jokic to eclipse that number again here, as the he continues cruising to what should be his first most valuable honors.