The Washington Wizards (32-36) travel to meet the Atlanta Hawks (37-31) at State Farm Arena on Monday night at 7:30 p.m. ET. The game is nationally televised on NBATV.

The Hawks also played the Pacers in their most recent outing, and they fell 133-126 in Indianapolis, failing as a six-point favorite as the Over connected.

The Hawks are favored by six points at home against the Wizards. That's the identical number they were laying to the Pacers last time out when they were beaten outright. The Wizards head into this one just looking to decide things in regulation, as their past two outings have ended in overtime victories. 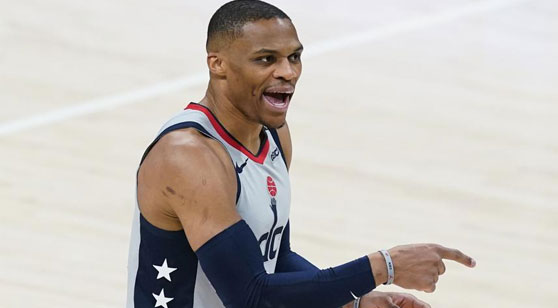 Russell Westbrook and the Wizards look for their third consecutive victory when they face Atlanta on Monday. (AP)

Washington has posted a 133-132 overtime victory in Indiana, and a 131-129 win in OT in Tampa against Toronto in another road game. Prior to that the Wizards were downed 135-134 in Milwaukee on May 5. In fact, their past two losses have been by one point each, and they lost 146-143 in overtime on April 26 against San Antonio. Those are their only three setbacks in the past 16 games dating back to April 10 in Phoenix.

Atlanta had been on a three-game win and cover streak before their setback last time out in Indiana. Those three victories were each at home from May 1-5. In fact, Atlanta has won and covered seven in row since a 120-109 loss against the Milwaukee Bucks on April 15.

The Hawks face the Wizards in the front end of a back-to-back set at State Farm Arena in Atlanta. Atlanta picked up the 116-100 win in D.C., cashing as a three-point favorite as the Under connected. While the Under is 5-2 across the past seven meetings in this series, the Over is actually 15-5-1 in the previous 21 battles in the ATL.

Washington heads into this one red-hot against the number, going an impressive 6-1-1 ATS across the past eight on the road, while going 6-1 ATS in the previous seven as an underdog. The Wizards are also a solid 5-0 ATS in their past five against teams with a winning straight-up record.

The Wizards are also coming in on a day of rest, and they're 13-3 ATS in the past 16 games when playing on one day of rest. Washington has also posted a tremendous 15-5-1 ATS in the past 21 games overall, as they have been hot against the spread while dealing their way back into the playoff picture.

As far as the total is concerned, it's all OVER all the time. The OVER is 5-0 in Washington's past five games overall, while hitting in each of the past four games on the road. The OVER is 6-1 in the past seven after a straight-up victory, while going 5-2 when working on one day of rest. The only UNDER trend is a 16-5 mark in the previous 21 games following a non-cover.

The Hawks have managed a very impressive 21-7 ATS mark across the past 28 games at State Farm Arena, while going a very solid 13-4 ATS in the past 17 games as a favorite. In addition, the Hawks have produced a very solid 12-3 ATS mark in the previous 15 outings against teams with a losing overall record.