Eastern Conference NBA action will resume on Saturday night with the Heat set to square off with the Bucks at eight o’clock eastern time in Milwaukee, Wisconsin.

Miami enters Saturday’s contest as a 2.5-point road underdog against the homestanding Bucks – marking the 19th consecutive matchup Milwaukee has been favored in. 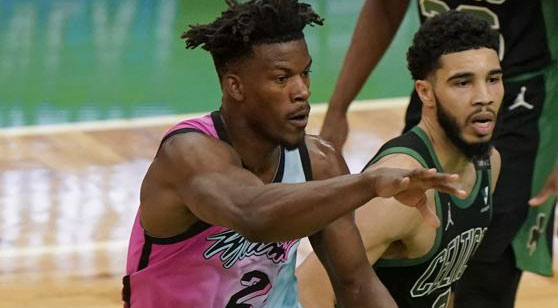 Jimmy Butler and the Heat hook up with the Bucks on Saturday night in a playoff rematch from last season. (AP)

The Heat head into Saturday boasting wins in six of their last seven games – with Miami’s lone loss coming in a matchup against the Mavericks in which leading scorerJimmy Butler sat out.

Miami’s most recent affair resulted in a double-digit win over the Eastern Conference-leading Sixers, as four different Heat players racked up 15 or more points on the way to Miami’s fourth straight victory.

On the flip side, the Bucks enter Saturday following SU victories in four of their last five games, despite failing to cover the spread in all five of those contests.

Milwaukee’s latest matchup resulted in a nine-point victory over the Pacers – which was an effort propelled by a dominant bounce-back performance by Giannis Antetokounmpo, as the reigning MVP went off for 40 points on 77.8% from the field after scoring just 23.7 points per game across is previous four-game window.

Miami and Milwaukee split a two-game mini-series back in December of this year’s regular season – with the first of those contests soaring 'over' the total set for Saturday’s tilt (241 points), and the second comfortably staying 'under' that number (227 points).

In the first matchup between these teams, the Bucks ran Miami out of the building behind Milwaukee’s best offensive effort of the season – as Khris Middleton and company banged home 29-of-51 (57%) three-point attempts during the victory, which ended up leaving Antetokounmpo (9 points) twiddling his thumbs for the majority of the blowout win.

The following meeting between these teams resulted in a double-digit win for the Heat though – as Miami managed to pull off the upset victory by holding the Bucks to just 108 points on 39% from the field, despite the absence of Butler (MIA +6.5).

After advancing from last year’s Eastern Conference and reaching the NBA Finals, the Heat have played relatively pedestrian basketball to follow up their title run – currently tied with the Knicks for the fifth seed in the East (39-31) with just two games left to play in this year’s regular season.

Miami has cranked up the intensity at both ends of the floor over the last few weeks though (6-1, L7), which lines up with the formula they drew up towards the end of last season – considering the Heat went into last year’s playoffs as the fifth seed in their postseason bracket, and still managed to battle all the way to an Eastern Conference title.

Despite ranking 25th across the league in points per game (107.9), leaning towards the high-side in Heat matchups has been the more profitable direction to sway with this season – considering the ‘over’ has cashed at a 37-33 clip since in contests containing Miami since last year’s title run.

Miami’s newfound pattern of ‘over’ results appears to be full steam ahead as they head down this final stretch of matchups too – which is highlighted by the fact the total has gone 'over' in 10 of the last 11 Heat games.

After getting bounced by Miami in a quick five games during the second round of last year’s playoffs, the Bucks decided to go out an acquire guard Jrue Holiday this past offseason as an attempt to push Milwaukee into the Eastern Conference’s “title-contender” territory.

Only time will tell in the postseason, but it currently seems like Milwaukee is still at least one major piece away from being included in conversations with teams that have a legitimate shot at taking home this year’s title such as the Lakers, Clippers, Nets, and a few others.

Betting the ‘over’ in Bucks’ games has played at one of the most profitable clips across the league this year – with the total going 'over' at a 41-29-1 clip in matchups containing Milwaukee, which ranks third across the league in that department.

That trend of high-scoring affairs appears to have fizzled out a little bit lately though, considering the total has stayed 'under' in seven of the last 12 Bucks’ games.

Duncan Robinson’s streaky season continued during Miami’s victory over the Sixers on Thursday night – as the Michigan-product shot just 1-of-7 from beyond the arc across 26 minutes of action during his three-point performance in Philadelphia.

Prior to that contest though, Robinson had scored 19 or more points on double-digit field goal attempts in three of his last four games – with his only subpar offensive performance during that stretch coming in a matchup against Minnesota that he played less than 18 minutes in.

I’ll back Robinson to bounce back with a solid night on the scoreboard here, as Milwaukee has become notorious for its inability to chase down shooters on the perimeter this season – and I expect that trend to continue in this matchup through Dunc.

If the Nets are able to knock off Chicago on Saturday afternoon, Brooklyn will have the second seed in the East officially wrapped up – which would completely disincentivize the remainder of the regular season for Milwaukee, considering the Hawks are bringing up fourth place in the conference six games behind the Bucks with just two contests left to play.

I’ll take the points with Miami here, as the Heat still have a chance to jump up and grab the fourth seed from the Hawks before the regular season concludes – which seems to have forced them to kick it into playoff-gear a little bit early this year.