Western Conference postseason action will resume on Sunday afternoon with Suns-Lakers Game 4 set to wrap up ABC’s nationally televised double-header before the action moves over to TNT for the evening slate of matchups.

After winning Games 2 and 3 by an average of 10.5 points, Los Angeles heads into Sunday’s contest as a 6.5-point favorite over the visiting Suns – marking the first time Phoenix has been listed as an underdog in three straight matchups since consecutively squaring off with the Jazz, Nuggets, and Clippers back in early-January.

Despite the first three postseason meetings between L. A. and Phoenix containing a lowly average of 201 points scored in them, the total for Sunday’s matchup is still stationed in the same ballpark as their previous stretch of contests – with the total for Game 4 currently hanging out around OU 210 at most shops. 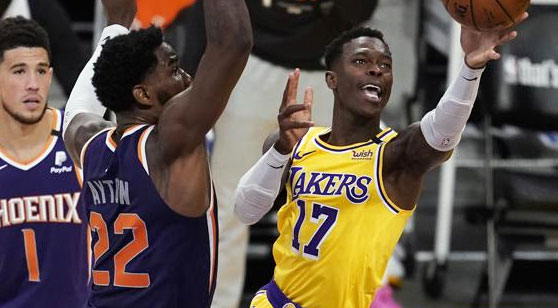 The Lakers seek a commanding 3-1 series lead over the Suns at Staples Center on Sunday. (AP)

The Suns entered the second half of the season with intentions of making a push for the first-seed in the conference down the homestretch – and despite falling one game short of their ultimate goal, Phoenix still gave the Jazz a run for their money in a race that Utah looked to have wrapped up pretty early on.

It appears Phoenix may be the taller team for the task in this series though – considering the Suns have participated in three competitive postseason battles against the defending champs, and the Jazz have been relatively underwhelming in their first-round matchup against Memphis.

Los Angeles flat-out couldn’t shoot in Game 1 against the Suns, as the Lakers tallied just 90 points on 43% from the floor during their series-opening loss – which was a pitiful team effort led by Anthony Davis, who scored just 13 points on 31% from the floor across 38 minutes of action.

Davis and the defending champs emphatically clapped back with a statement win in Game 2 though, as Phoenix experienced extensive issues defending L.A.’s big man in the post throughout the contest – allowing the eight-time All-Star to go for 34 points while attempting 21 free throws on the way to the Lakers’ series-evening victory.

The Lakers’ struggles from three-point land appeared to travel home with them for Game 3, as LeBron James and company shot at a significantly lower clip than Phoenix from downtown in their third postseason meeting – knocking down just seven threes’ at a 25% clip across the affair.

Los Angeles managed to seize full control of this series through its foul-shooting during the third meeting between these teams though, as Los Angeles outscored Phoenix, 26-14 from the free-throw-line in the contest – ultimately, leading to a double-digit victory for the Lakers.

The Suns were victorious in two of three matchups against the Lakers during the regular season – with two of those contests cruising 'over' the total at an average of 225.5 points per game, and the other falling 20 points short of that previously mentioned average (111-94).

James and Davis both didn’t participate in the other matchup between these teams though. So, you can pretty much toss it out of the equation while considering your betting options in this series.

But for what it is worth, the matchup that took place during L.A.’s extensive superstar-less period contained 205 points – as the Lakers contributed just 94 of those at a 41.2% clip on the way to the Suns’ second double-digit victory over Los Angeles this year.

The Suns concluded their regular-season campaign riding an impressive 9-3 stretch that fell just one victory short of stealing the top seed in the conference from Utah during the final weeks before the start of the playoffs.

Unfortunately for Phoenix though, that one-game differential ended up landing them this brutal first-round matchup against the defending champs – as opposed to the Jazz squaring off against a Memphis squad that hasn’t made the playoffs since 2017.

In terms of scoring volume, Phoenix finished up the regular season owning the top over-percentage in the Western Conference – with the total going 'over' at a 42-30 clip in Suns’ games this year (58.3%).

The pace in this series seems to be leaning with Los Angeles on the low-scoring side of the spectrum though – considering the first three postseason events between these teams have contained an average of just over 201 points scored in them.

After struggling for months due to the extended absences of L. A.’s superstars, the Lakers finally appeared to get healthy towards the end of the regular season – but still, several unanswered questions surrounded Los Angeles heading into the play-in tournament.

The Lakers put an end to those injury discussions during their pivotal play-in matchup against the Warriors though, as Los Angeles pulled off the one-possession victory behind some phenomenal defensive displays and a big-time triple-double from King James – securing the seventh seed in the conference and a first-round matchup against Phoenix.

Betting the ‘over’ in Lakers’ games played at the worst clip in the league during the regular-season, regarding the total – with just 39.4% of matchups containing Los Angeles going over the number this year.

L.A.’s low-scoring trend has stayed alive over the Lakers’ opening run of playoff matchups too – highlighted by 'under' results in three-of-four matchups since the conclusion of the regular season, and Game 2 against Phoenix pushing at a low-bar of 211, depending on your book.

After struggling for 13 points on 5-of-16 from the field in the first matchup of this series, Davis clearly had a chip on his shoulder heading into the Lakers’ Game 2 matchup against Phoenix and is yet to look back since.

I’ll back The Brow to keep up his high level of scoring production here – as LeBron still appears to be somewhat hobbled due to his lingering ankle issue, and there is no need for King James to start overexerting himself with the way AD has played over the last couple games.

Before the Lakers’ convincing home victory in Game 3, I said my vote of confidence officially went to the Lakers in this series because King James seemingly always figures out how to handle his team’s business in the playoffs – but I still didn’t think getting past Phoenix would come easy.

I’m going to double-down on that take and back the Suns again here, as I expect Sunday’s Game 4 matchup to be heavily contested from start to finish – even if L.A. ends up pulling off a third straight victory over Phoenix.