One Eastern Conference squad has pulled off a first round sweep already as Milwaukee is waiting for the winner of the Brooklyn/Boston series.

Top-seeded Philadelphia looks to advance to the second round with a win on Monday at Washington, while the 76ers go for their seventh win over the Wizards in seven tries this season. 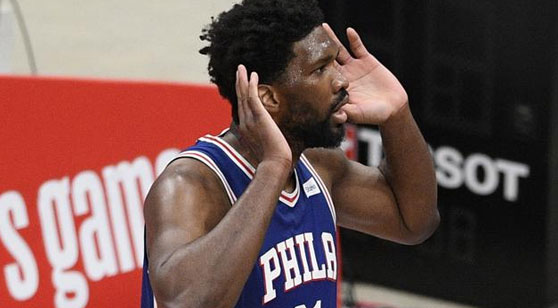 Joel Embiid and the 76ers seek the four-game sweep of the Wizards on Monday night in Washington. (AP)

It's been all 76ers so far through three games, as Philadelphia is trusting the process, at least so far in the postseason.

Philadelphia has dealt with high expectations in the past, but have failed in the playoffs, not going past the second round since its NBA Finals appearance in 2001.

The closest game in this first round series came in the opener at Wells Fargo Center as the Sixers held off the Wizards, 125-118, but failed to cash as eight-point favorites.

Game 2 was blowout city in the City of Brotherly Love as Philadelphia cruised past Washington, 120-95 as 8.5-point favorites. The Wizards were limited to 38 points in the second half, while Joel Embiid and Ben Simmons each scored 22 points to lead the 76ers.

Russell Westbrook left Game 2 with an ankle injury, but the triple-double machine returned for Washington back at home in Game 3, but it wasn't enough in a 132-103 setback.

Philadelphia basically led from start to finish, building a 72-58 halftime edge and shooting a scorching 17-of-33 from three-point range.

In the two victories at Capital One Arena this season, the 76ers have outscored the Wizards by 26 and 29 points.

Embiid put up a playoff career-high 36 points, while Westbrook toughed it out with the bum ankle for another triple-double (26 points, 12 rebounds, and 10 assists) in the loss.

Since the All-Star break, the 76ers own an impressive 11-2 SU and 9-3-1 ATS mark as a road favorite with only ATS loss in a win, coming in an overtime triumph at San Antonio as 10-point chalk.

The Sixers are 6-2 to the Under this season with totals of 230 or higher, including a 3-0 Under mark on the road in this total range.

The Wizards saw totals between 230 and 240 a whopping 40 times this season! Washington went 21-19 to the Over in those games, but are 3-1 to the Under in the last four at home in this situation.

Washington is 0-6 this season against Philadelphia, while the Wizards try to improve on a 12-10 ATS mark in the role of a road underdog (0-2 ATS vs. the 76ers).

Philadelphia is on the doorstep of the second round and this series will be over in the next few days. The favorites have ruled over the last week in the playoffs and there's no reason to take the points with Washington just to think they will cover and lose.