Boston and Philadelphia will meet for the first time this season on Thursday night.

The Bruins will host the Flyers on Saturday too as the NHL continues to have teams play back-to-back with a day of rest in between to mitigate any potential COVID issues.

These teams were two of the four favorites to come out of the Eastern Conference per the early season Stanley Cup betting odds. 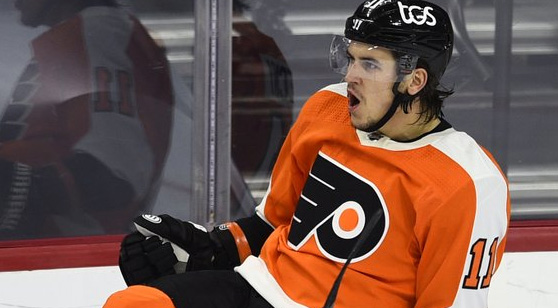 The offense of the Flyers has been the catalyst for their early success, scoring three-plus goals in all three of their wins. (AP)

Philadelphia is off to a strong start this season. The Flyers are tied with the Washington Capitals atop the East Division with six points, and they have a 3-1-0 record through four games. This has been the best offense in the league with 15 goals in regulation.

They potted a whopping 11 goals in their first two games against Keystone State rival Pittsburgh. Travis Konecny recorded a hat trick and added an assist in a 5-2 victory in the second game over the Penguins. However, the Flyers laid an egg at home against Buffalo on Monday, falling 6-1 to the Sabres.

That loss was avenged the following day with a 3-0 shutout win over Buffalo. Konecny opened the scoring in the second period, and Kevin Hayes recorded a goal and an assist. Brian Elliott stood tall in net with 40 saves to keep a clean sheet in his first start of the season.

Boston is built on defense. The Bruins have lived up to their reputation with three low-scoring games to start they year. A total of nine goals have been scored in those three games, and they each have been decided by one goal.

The Bruins’ lone win came in the season opener against New Jersey. They beat the Devils 3-2 in a shootout as Tuukka Rask didn’t allow a puck to get past him. Their second game against the Devils went to overtime too, but Yegor Sharangovich beat Jaroslav Halak with two seconds to play in the extra frame to give the Bruins an overtime loss.

This offense sputtered against the New York Islanders on Monday. Boston had 27 shots on goal but couldn’t beat Semyon Varlamov in a 1-0 win for the Isles. Rask stopped 16 of 17 shots, but he allowed a goal late in the third period that the Bruins couldn’t overcome.

Konecny is off to a great start this year. He leads the Flyers in every major offensive category with four goals, six points, and a plus/minus of +5. Only one of his points came on the power play, highlighting that he is playing very well at even strength. The 23-year-old has improved his point totals every year he has been in the league, and he notched 61 points in just 66 games last year.

His improved play has helped ease the burden on the rest of the team with Sean Couturier out of action for the next two weeks. Couturier is the Flyers’ jack of all trades first-line center, so it hurts not having him in the lineup.

Kevin Hayes is playing very well with two goals and three assists. Veteran Claude Giroux is continuing to get it done too with three assists to his credit. Oskar Lindblom has lit the lamp multiple times, and there are a total of eight players with three points through four games.

Fans were excited to see youngster Morgan Frost in action, but he left Tuesday’s game with Buffalo midway through the second period and didn’t return. Frost’s status is up in the air for this game.

Goaltending has been an issue for the Flyers for decades. Philadelphia has not had a top-tier player between the pipes since Ron Hextall was on the roster, and even Hextall had some shaky years with the team. However, they may have finally solved those woes with Carter Hart. The 22-year-old had a breakout 2019-20 campaign, but he has been shaky through his first three starts in 2021.

There are already serious concerns about Boston’s offense. The Bruins have yet to score an even-strength goal through three games this season. Both goals they netted in the opener came off the power play, and the other goal was a short-handed tally.

Feisty Brad Marchand has had a hand in all three of the Bruins’ goals to this point. He and Patrice Bergeron are the only players with multiple points, and they are playing well through three games.

However, the rest of the offense is having a tough time getting it done without top goal scorer David Pastrnak. Pastrnak is recovering from hip surgery and likely will be out of the lineup for at least another two weeks. Bruce Cassidy has shuffled his lines trying to get something to work, but nothing has really helped this early in the season.

David Krejci has played well as the team’s second center behind Bergeron. However, the lack of quality goal scorers at the wings aside from Marchand and Pastrnak is really limiting this offense. That might lead to a trade in the coming weeks if it doesn’t change.

Rask and Halak are the best goaltending tandem in the league. Rask led the league with a 2.12 GAA last year, and he was one of the Vezina Trophy finalists with a .929 save percentage.

Meanwhile, Halak has rejuvenated his career as the nominal backup with a 2.39 GAA and a .919 save percentage last year. The Bruins’ system and a solid defense helps these goaltenders thrive, but they no longer have Zdeno Chara in the middle of the ice.

We’ll see contrasting styles between these teams as the Flyers want to go up and down the ice, while the Bruins want to play a conservative game. Hart should be primed to shake off his earlier performances after a rough start, so the Flyers are the pick given the Bruins’ offensive woes.