The Detroit Red Wings were the worst team in the NHL by a considerable margin during the 2019-20 season.

The Red Wings finished the year 17-49-5, surrendering 122 more goals than they scored. Detroit finished with 23 fewer points than any other team in the league as Steve Yzerman fully gutted the team in order to rebuild from the ground up.

After making the postseason for 26 straight years, Detroit hasn’t made the playoffs in five years and has a losing record ahead of Sunday’s tilt with the Chicago Blackhawks. 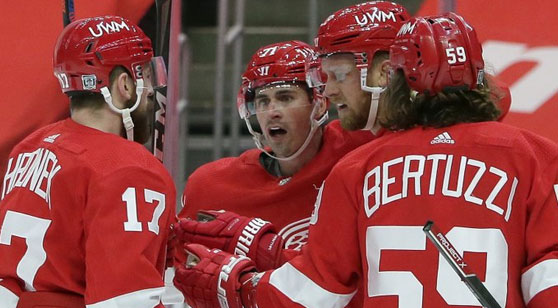 The Red Wings square off with the rival Blackhawks for the second time in three days on Sunday. (AP)

Chicago did not fare well in the Sunshine State to start the season. The Blackhawks only made the playoffs due to the NHL’s expanded format last year, and they began this year with four straight losses.

Their two losses to Stanley Cup champions Tampa Bay weren’t unexpected. The Lightning jumped on the Blackhawks early in their season opener, taking a 5-0 lead before Dylan Strome scored a lone goal for Chicago to avoid a shutout.

They were more competitive in the second game, battling back from a 3-0 deficit with goals from Alex DeBrincat and Patrick Kane before losing 5-2 to the Lightning.

The Blackhawks got off to a slow start against Florida in their next game, falling behind 2-2 on their way to a 5-2 loss. They allowed their opponent to score five goals for the fourth straight time on Tuesday night against the Panthers.

Chicago finally earned a point as Dominik Kubalik scored twice on the power play for the Blackhawks to force overtime, but Kevin Lankinen surrendered the game-winning goal in overtime.

Detroit has alternated losses and wins through its first five games this season. The Red Wings spent their first four games in the Motor City, splitting with Carolina and Columbus. They were outshot 43-14 in a 3-0 loss to the Hurricanes in their season opener, but they responded with three third-period goals (two from Dylan Larkin) to beat Carolina 4-2.

Two Bobby Ryan goals weren’t enough for Detroit to get past Columbus on Martin Luther King Jr. Day, but the Red Wings knocked off the Blue Jackets 3-2 in overtime the following day.

Tyler Bertuzzi was a big difference maker with the primary assist on Anthony Mantha’s first period goal, and he scored the game-winner in overtime for a 3-2 win.

These teams met in the Windy City on Friday night with Chicago dominating the proceedings. Kane opened the scoring on the power play, while Calvin de Haan and Andrew Shaw extended the Blackhawks’ lead to 3-0 early in the third period.

Larkin pulled one back for Detroit, but it wasn’t enough as Mattias Janmark netted a short-handed goal to end the Red Wings’ hopes in a 4-1 Chicago win.

Bobby Ryan was signed to a one-year deal in the offseason in order to help change the culture in the locker room.

Ryan is one of the NHL’s most respected veterans, and he is helping turn this team around with his play on the ice and leadership off it. He leads the Red Wings with four goals in four games with all those tallies coming at even strength.

Larkin leads the team with three goals and two assists. Bertuzzi and Mantha each have a goal and two assists as well, and these three players along with Ryan have combined to score nine of Detroit’s 10 goals. Robby Fabbri notched the other goal as we haven’t seen much scoring outside of the primary weapons.

This power play has not been good. Detroit has only converted on one of its 12 power play opportunities. Only four teams have a less efficient power play, as the Red Wings have just 16 shots with a man advantage.

Unfortunately, it’s unlikely that changes anytime soon as COVID has knocked out four of their wingers for this game including Fabbri.

Thomas Greiss has been in net for all three of Detroit’s losses. He has a 2.74 GAA with a respectable .918 save percentage in his three starts. Jonathan Bernier has been between the pipes for both Red Wings’ wins and holds a 2.00 GAA with a .927 save percentage.

Kane is the best player on the ice for the Blackhawks.

The three-time Stanley Cup winner and nine-time All-Star is two years removed from a career-high 110-point season. He leads Chicago with three goals and two assists through five games, and he notched a goal and an assist against Detroit on Friday.

The Blackhawks have been particularly dangerous on the power play due to the presence of Kane, DeBrincat, and others.

Seven of Chicago’s 13 goals have come from the man advantage, and the Blackhawks have converted on 41.2 percent of their power play opportunities through five games. Kane and Strome each have a goal and two assists on the power play, while DeBrincat has two goals and two assists up a man.

Defense has been a problem for Chicago.

Duncan Keith continues to provide a lot of help on the offensive end, but there aren’t the same playmakers along the back line that we saw when the Blackhawks were a perennial title contender last decade. They allowed 30 goals in their nine postseason games last year, and we haven’t seen much improvement in this area.

Chicago doesn’t have a lot of depth at center with Kirby Dach, Jonathan Toews, and Zack Smith all on injured reserve.

Detroit has been more competitive than we saw last year, so the Red Wings are the pick to get their first road win.