The UNDER seems to be the best play, but as a bettor, you don't want to wager against Conor McDavid and Leon Draisaitl to have a great game for which they are overdue. However, Connor Hellebuyck is an elite goalkeeper who is more than capable of carrying his Jets to the Stanley Cup finals.

Edmonton is a solid road team though, so this might be the game to lean Edmonton. If the -125 ML is a bit pricy for you, the -1.5 puck line is +200. The Oilers are due for a -1.5 cover this series, and playing desperate on the road (an environment they're cozy in) might be the time to pull the trigger.

So what we know about this series is that the Oilers have yet to crack Hellebuyck's terrific play. The UNDER has also hit in three straight meetings, along with four of the last five matchups. The UNDER at 5.5 at -115 is enticing, and certainly worth a look if you fancy that number. The conviction Edmonton is due for a breakout game on offense is strong for me.

The Oilers are capable of scoring four or five on Winnipeg, even with Hellebuyck locked in. If leaning UNDER, also consider that at least one team has failed to score two goals in five straight meetings. Both teams to score two goals (in 60 min.) failing is set at +123. Over the last five games between both teams, the losing team has scored one goal three times and has been shut out twice. 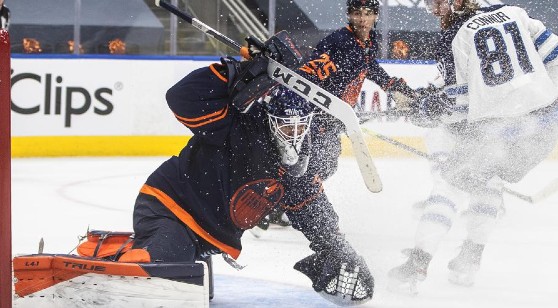 The road team has won five straight games played between the Edmonton Oilers and the Winnipeg Jets. (AP)

Edmonton is a much better road team for punters, winning $633 when playing away from the Rogers Place. The Oilers are 19-7-2 when playing on the road.