It's do or die for the Nashville Predators, and the good news is that they'll play in front of their raucous crowd on Thursday night in an elimination game. The Predators won both of their playoff games by double-overtime at Bridgestone Arena, with Juuse Saros making a ridiculous 110 saves during the two marathon games in the Music City.

Saros is the key to Thursday's game with the team's back against the collective wall. You can expect him to triumph in a low-scoring game, as the Predators won't be keen on taking chances. They won't want to give the Hurricanes odd-man rushes the other way, so they'll play it careful and close to the vest. And conversely, the Hurricanes won't want to give the Predators any reason to get their fans amped up, either, so expect them to bring a little more sandpaper than usual.

Each of the first two meetings at Bridgestone Arena were one-goal games, and each of the past three games in the series have ended up going at least one overtime. There is no reason to believe Game 6 will be any different. 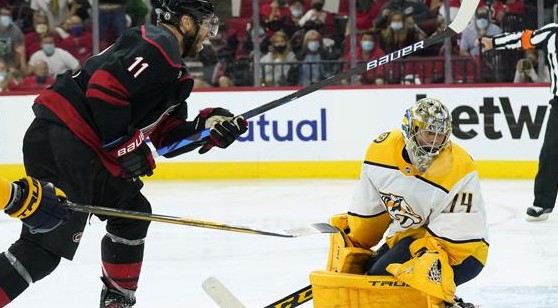 The home team has won 12 straight games played between the Carolina Hurricanes and the Nashville Predators. (AP)

It's now or never for the Predators. It's been a changing of the guard in the Music City this season, as Saros has taken the reigns as the No. 1 backstop and he has handled the job with aplomb. The margin of error has been razor thin in each of the past three games, and could have gone either way. Games 3 and 4 went in the favor of the Preds, mainly because of their home crowd, and there is no reason to believe Game 6 will be any different. The home team is a perfect 5-for-5 in this series so far.

The public has been siding with the Hurricanes as slight favorites, but Carolina is 0-4 in its past four games as a road fave, and they have dropped four in a row in the Music City. Conversely, Nashville has won 13 of its past 16 at Bridgestone Arena. The Predators are perfect 4-0 in the past four as a home 'dog, too.

The UNDER is usually the lean as playoff series go later and later, and this one is no exception despite the OVER hitting in Games 3 and 4 in Nashville. Hitting and checking will be tighter and higher, and the scoring will be much lower.