Barry Trotz is three wins away from leading the New York Islanders to their first Stanley Cup Finals in 37 years. The Isles had one of the NHL’s greatest dynasties in the early 1980s, winning four straight Stanley Cups and 19 straight playoff series with Mike Bossy, Bryan Trottier, Denis Potvin, and Billy Smith leading the way.

This franchise has been lost in the wilderness since that incredible run, but the Isles made it to the Eastern Conference Finals last year and are up 1-0 on the Tampa Bay Lightning after a 2-1 victory in Game 1.

Semyon Varlamov was one of the heroes of Game 1 for the Islanders. He has now posted a save percentage of at least .958 in his last three starts against the Lightning, stopping 112 of the 116 shots he has seen in those games.

Varlamov is overdue for a rough outing against Tampa Bay. The Lightning have a superb power play and a bevy of offensive weapons to throw forward. They will come up with a counter for the Isles’ style in Game 2 and light up the scoreboard. Look for Point and Kucherov to both get on the board this time. 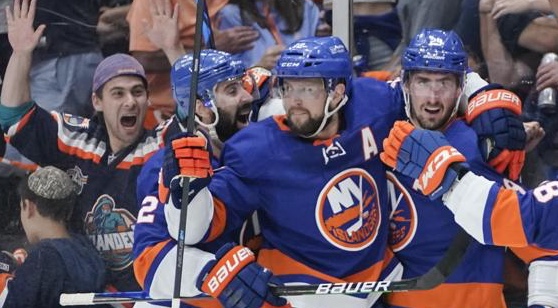 The New York Islanders have covered the puck line in 10 of their last 11 games when playing as underdogs. (AP)

The Lightning did not look sharp in Game 1 on Sunday. They scored just one time for only the second time in the postseason, and that goal came with 54 seconds left in regulation. Brayden Point found the back of the net in a six-on-four with Tampa Bay on the power play and Andrei Vasilevskiy on the bench for an extra attacker.

Tampa Bay’s offense will look to get going after a disappointing performance. Point, Nikita Kucherov, and Steven Stamkos combined to take just four shots on net Sunday. They did convert on one of their two power play chances to remain the top unit in the postseason, but they didn’t have much success at even strength.

A big issue for the Lightning was turnovers. Tampa Bay had seven giveaways in Game 1, as the Islanders did a great job of harassing the Lightning’s best players. That led to frustration from the Lightning, and it was somewhat reminiscent of what we saw from this team during their collapse in the 2019 NHL Playoffs.

Meanwhile, the Islanders’ best offensive threat continued to flourish despite limited chances. After being held to just three assists in six games against Pittsburgh in the first round, Mathew Barzal had a breakthrough against Boston. He scored a goal in three straight games, and he had a goal and an assist in Game 4 and Game 5 in that series.

Barzal was excellent in Game 1 against Tampa Bay. He scored the first goal of the game midway though the second period after a Stamkos turnover. Josh Bailey found a streaking Barzal who got the angle on the defender and then beat Vasilevskiy with a quick shot to give the Isles a lead they would not relinquish.

The Islanders aren’t going to score many goals, so they need to take advantage of their opportunities. Barzal is one of the few players on the ice that can make a play out of nothing for New York.

Although Vasilevskiy wasn’t bad in net, stopping 29 of the 31 shots he saw on Sunday, he could have done better on the two goals he did allow. Both Barzal and Ryan Pulock beat him through the wickets, and that latter goal was an uncharacteristically weak goal by his standards. Pulock beat Vasilevskiy with a low slap shot from the point that was seen the whole way without being deflected, and the Vezina Trophy finalist was a bit slow to react.