For the first time in almost three decades, the New York Islanders will host a Stanley Cup semifinals game. Although the Islanders took on the Tampa Bay Lightning in last year’s Eastern Conference Finals, those games were played in Edmonton’s Rogers Place due to the COVID pandemic. The Isles are level with last year’s Stanley Cup winners through two games, and they will look to take a 2-1 win lead over the Lightning on Thursday night in Long Island.

Tampa Bay has yet to outclass the Islanders in this series. Varlamov didn’t have his best game in the last meeting between these teams, but he will play better in front of a raucous home crowd in Game 3. That makes the Islanders the pick as a home underdog. 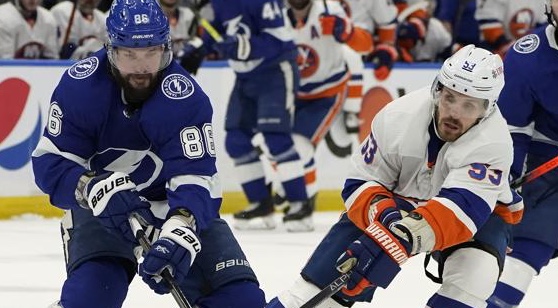 The goal total has gone UNDER in three of the last four games played between the Tampa Bay Lightning and New York Islanders. (AP)

What will we see out of the Lightning on Thursday night? In Game 1, Tampa Bay came out flat. The Lightning looked like the Presidents’ Trophy winning team that was swept in the first round by Columbus two years ago. They failed to score until the final minute of the game in a 2-1 loss.

It was imperative that the Lightning set the tone early in Game 2. Pat Maroon gave the team a spark after he and Scott Mayfield were tangled up, and we saw Tampa Bay look much more focused from the outset. That sense of urgency helped the Lightning pick up a 4-2 win to tie the series at one.

There will be a spotlight on the officiating after both teams had justified gripes on Tuesday. The Islanders’ first goal came off a power play after Brayden Point was assessed a two-minute minor for goaltender interference. Replays showed Point had been pushed into Semyon Varlamov by the Islanders’ Adam Pelech, but the referees put Point in the box and the Isles capitalized on the opportunity.

In the second period, it was the Islanders that had a legitimate gripe. Tampa Bay should have been penalized for having too many men on the ice, but instead Ondrej Palat scored the go-ahead goal for the Lightning. Barry Trotz tried to notify the officials of the mistake, but that penalty is non-reviewable.

Varlamov is expected to be the Game 3 starter although he left the game for almost seven minutes at the end of the first period. Point’s collision with Varlamov led to the Isles’ goaltender leaving the ice for evaluation, but he returned to the ice at the start of the second period.

We saw Varlamov post his worst game since the Islanders’ opening round series against the Pittsburgh Penguins. He allowed four goals on 27 shots in a little over 50 minutes of ice time. A rough start may lead to Barry Trotz putting in Ilya Sorokin, but it’s likely that Varlamov will play despite being listed as day-to-day.

Nikita Kucherov looked great in Game 2. He was crashing the net early and ended up with three assists on the evening. Kucherov now has 17 assists through 12 games this postseason, and it’s clear the Islanders have to put more pressure on him.

The Lightning had yet to have any of their defensemen score a goal until Tuesday night. Jan Rutta and Victor Hedman both found the back of the net to break this drought. It’s unlikely that either one scores again this series though, as Tampa Bay generally has its defenders stay back since the forwards are so good.

Mathew Barzal has now scored a goal in five of the last six games for the Isles. This team’s leader in points during the regular season finally came alive after failing to score against the Penguins, and he has a good chance to score again in Game 3.