There will be a Game 7. That call echoed throughout a delirious crowd at Nassau Coliseum on Wednesday night as the New York Islanders erased a two-goal deficit to beat the Tampa Bay Lightning 3-2 in overtime. It was a tough loss for the Lightning, as Jon Cooper was looking forward to his team getting some rest. Now, the Lightning and Islanders will meet in a do-or-die Game 7 with a trip to the Stanley Cup Finals on the line.

This game might be officiated a little more tightly than we usually see for a Game 7. The Islanders have gone after two different Lightning players in the last two games, and that has led to an outcry among some members of the media.

Tampa Bay has the best power play in the league. The Lightning converted on three of their six power-play opportunities in Game 5, and they will punish the Islanders if they are sent to the box on Friday. That will help Tampa Bay get back to the Stanley Cup Finals to defend the title. 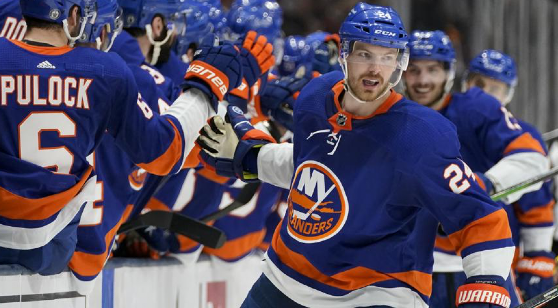 The home team has won four of the last five games played between the Lightning and the Islanders. (AP)

Brayden Point has been incredible this postseason. He opened the scoring in Game 6, and he now has at least one goal in nine straight games dating back to Game 3 against Carolina. Unsurprisingly, he is the leading scorer this postseason with 14 goals in 17 games, and the Lightning will count on him to light the lamp once again on Friday.

Point’s production is even more important considering the status of Nikita Kucherov is up in the air. Kucherov was viciously cross-checked from behind by Scott Mayfield early in Game 6, and he was done for the night after just 46 seconds of ice time. It appeared that Kucherov’s kidney may be the issue considering the location of the egregious cross-check, so he might not see the ice on Friday night.

If Kucherov is unable to play, that would be a big loss for the Lightning. Kucherov has more points than any other player this postseason with five goals and 22 assists through 17 games. He has been incredible since returning from an injury that kept him out of the entire regular season, looking like the same Kucherov that won the Art Ross Trophy and Hart Trophy two years ago.

As for Mayfield, the Isles’ forward is unlikely to see any discipline other than a fine from the NHL Department of Player Safety. Mayfield’s cross-check was in full view of a referee that didn’t blow his whistle, and Mayfield ended up scoring the game-tying goal midway through the third period. Mathew Barzal was allowed to play Game 6 after receiving a game misconduct in Game 5 for a high cross-check on Tampa Bay’s Jan Rutta, and he proved to be a difference maker for the Isles.

Anthony Beauvillier is tied for second in points after notching the game-winning goal in Game 6 off a turnover by Blake Coleman. Josh Bailey has a goal and an assist in this series, but Jean-Gabriel Pageau has been held without a point since the Boston series.

New York has yet to score more than three goals in any game this series. The Isles are a defensive team, so that’s not a huge surprise, but it highlights the discrepancy between them and the Lightning. Tampa Bay would win a wide-open game, so the Isles have to slow things down and get physical to win.