Monday night’s college basketball betting action in the Pac-12 features a matchup between the Arizona Wildcats and the Oregon Ducks at Matthew Knight Arena. Tip-off on ESPN2 is slated for 9 p.m. (ET).

The Ducks are favored by four points at home for this Pac-12 tilt. The total line for the game has been opened at 143.5 points.

Arizona is 3-0 straight-up in its last three games, including a road upset over USC on Feb. 20. It is still just 3-5 against the spread in its last eight games. The total has stayed UNDER in eight of its last 11 games.

The Wildcats lost to Oregon by two points on Feb. 13 as slight 1.5-point home favorites. This extended their SU losing streak in this series to six games. They are just 2-8 SU and ATS in their last 10 games against the Ducks.

Oregon moved to 7-1 SU (4-3 ATS) with Saturday’s 11-point road victory over California as a nine-point favorite. The total has gone OVER in its last two games after staying UNDER in its previous five outings.

The Ducks are 9-2 SU at home this season but they have failed to cover in four of their last five home games. The total went OVER in three of those five games. 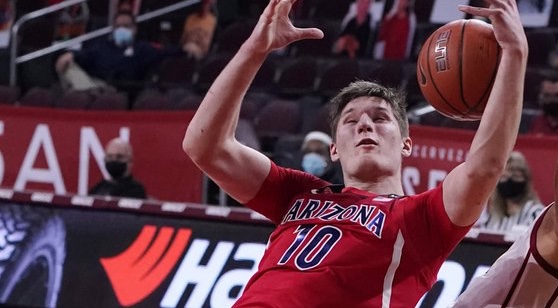 The Arizona Wildcats continue to play competitive basketball, despite a self-imposed postseason ban that will see them miss the tournament. (AP)

Arizona moved to 11-8 SU in Pac-12 play with Saturday’s 75-74 win against Washington as a 14-point home favorite. James Akinjo scored a career-high 26 points with seven assists to help pace the win.

The junior guard leads the team in scoring this season with 15.4 points per game. This was the fourth-straight game he has posted 19 points or more. There are three more players averaging at least 10 PPG this season.

The Wildcats’ scoring average stands at 75.7 points with a total of 38.7 rebounds a game. Forward Azuolas Tubelis leads in rebounds with 7.2. They are shooting 44.7% from the field and 37.3% from three-point range.

Arizona has not allowed more than 74 points in its current three-game winning streak. The team’s points-allowed average this season is 68.1.

Oregon is one game in back of UCLA for first place in the conference standings at 11-4 SU. Guard LJ Figueroa ended Saturday’s game with 20 points and 14 rebounds. Forward Eugene Omoruyi was the team’s leading scorer with 21 points.

Senior guard Chris Duarte continues to lead the team in scoring this season with 17.2 PPG. He added 17 points to Saturday’s winning cause. The Ducks have a total of four players scoring at least 11 PPG.

This all adds up to 73.2 PPG while connecting on 46% of the shots from the field and 35.5% of the shots from outside the three-point line. Oregon has held opposing teams to 72 points or less in its previous seven games. It is giving up an average of 66.4 PPG this season.

Give Arizona credit for its strong finish down the stretch, but Oregon is clearly the better all- around team in this matchup. It has also completely controlled this series over the past several seasons.

I'm looking for this season’s sweep on Monday night with another Ducks’ win covering the current spread.

I'm also sticking with the recent betting trends on the total line favoring the UNDER. I have defense playing a bigger role in deciding Monday’s outcome to keep the scoring lower than expected on the current total line.