The Indiana Hoosiers will close out play in the Big Ten regular season on the road this Saturday against the No. 23 Purdue Boilermakers. Tip-off from Mackey Arena is set for 2 p.m. (ET).

Purdue has been opened as an eight-point home favorite for Saturday’s game with the total line set at 133.5 points.

Indiana has lost its last four games both straight-up and against the spread. It is now 7-11 SU and 6-10-1 ATS in Big Ten play. The total has gone OVER in seven of its last 10 games.

The Hoosiers’ current SU losing streak against Purdue stands at eight games following a 12-point loss at home on Jan. 14 as four-point favorites. They are 2-5-1 ATS during that same span with the total staying UNDER in five of the eight matchups.

Purdue has been able to string together four wins in a row both SU and ATS to improve to 12-6 SU (10-7-1 ATS) in conference play. The total has stayed UNDER in six of its last 10 outings.

The Boilermakers are 10-1 SU at home this season with an even 5-5-1 record ATS. The total has gone OVER in six of their last seven home games. 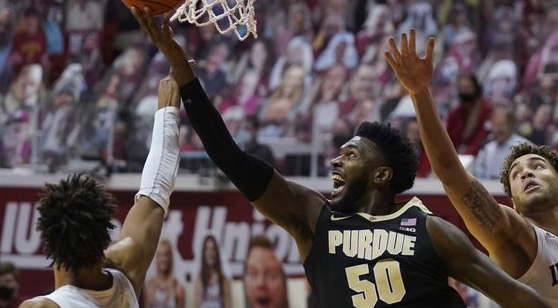 Big man Trevion Williams is the senior leader for Purdue, averaging over 15 points and eight rebounds per game. (AP)

The Hoosiers are playing their way out of a possible bid for this season’s NCAA Tournament. Four of their last six losses have been by double figures and they have lost their last three games on the road (SU and ATS).

Forward Trayce Jackson-Davis continues to lead the team in both points (19.4) and rebounds (9.2). Indiana could be without its second-leading scorer on Saturday with guard Armaan Franklin (11.6 points) still listed as questionable with an ankle injury.

The Hoosiers are averaging 71 points per game while shooting 43.7% from the field and 33.6% from three-point range. They are pulling down an average of 35 rebounds a game.

Defensively, Indiana is allowing an average of 69.8 PPG. This has jumped to 72.3 points during the current four-game losing streak.

Purdue is moving in the right direction at the right time of the year. Freshman center Zach Edey posted a career-high 21 points in Tuesday’s win at home against Wisconsin. Guard Sasha Stefanovic had the hot in a recent road win against Penn State with 16 points.

Forward Trevion Williams remains the team leader in both points (15.6) and rebounds (8.9). There are a total of six players averaging at least nine points a game. The Boilermakers are averaging 71 points and 37.7 rebounds a game. They are shooting 45.1% from the field and hitting 33.7% of their three-point attempts.

After holding teams to fewer than 70 points during the four-game winning streak, Purdue is allowing an average of 65.8 PPG.

Saturday’s in-state showdown features a pair of rivals heading in opposite directions. Too many factors point to a relatively easy victory over Indiana to extend Purdue’s recent dominance in this series. This adds value to betting that the Boilermakers pull off the season sweep ATS as well.

Each team has strong trends favoring the OVER on the total line in recent play. I'm leaning in that direction for Saturday’s contest with Purdue helping to take this game’s total line OVER as well.