The Florida Gators (14-8) tangle with the Tennessee Volunteers (17-7) in an SEC Tournament Quarterfinals matchup in Nashville on Friday at 2:30 p.m. ET on ESPN.

Rivals Florida and Tennessee meet in a Quarterfinals matchup in Nashville, and the first thought here is that the Volunteers will enjoy a little home-court advantage playing in Tennessee. Capacity is capped at 20 percent for each game, however, so the disadvantage for Florida is mitigated somewhat.

These teams just met in the regular-season finale on Sunday, and the Volunteers came away with a 65-54 win at Thompson-Boling Arena in Knoxville as they covered a six-point number with the UNDER (136.5) cashing.

The Vols have been spinning their wheels a little bit down the stretch, alternating wins and losses across the past seven games, while going just 2-4-1 ATS during the span.

For Florida, their finish in the regular season forced them into the second round as a five-seed, eliminating a chance at a bye. They were forced to grind out a 69-63 win over No. 12 Vanderbilt, obviously another Tennessee school, so they already have the experience playing in the Volunteer State in front of a smattering of local-based fans.

The Gators failed to cover against an 8.5-point number in the win over Vandy Thursday as the UNDER (144) cashed. That's been the rule lately for Florida, as they are 0-3 ATS across the past three outings, and 2-6 ATS over the previous eight outings for the Gators.

In addition, low-scoring offensive totals and good defense have ruled the day, too, as the UNDER is 7-0-1 across the past eight outings for Florida, as they have scored 74 or fewer points in each of the previous eight contests.

Florida met Tennessee twice this season, and they mustered just 54 points in an 11-point loss in Knoxville on Sunday. The Gators humbled the Vols 75-49 back on Jan. 19 on Billy Donovan Court as a nine-point underdog, and the common theme here is that the UNDER (136) also connected in that game.

The Gators are averaging just 74.6 PPG to rank 97th in the country, and they're 167th in defense, allowing just 69.8 PPG. Defensively, the Gators have rank 33rd against the three-ball, as opponents are hitting just 30.3% from behind the arc against them. 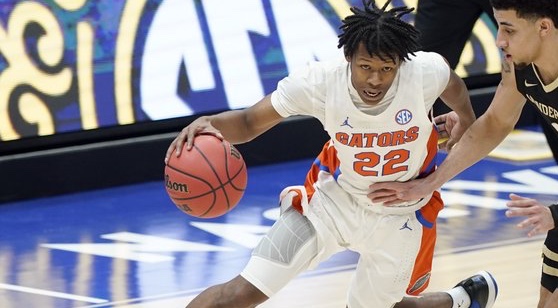 The Florida Gators defeated Vanderbilt in Round 1 of the SEC Tournament, looking to continue its success against Tennessee. (AP)

The Vols closed on a high note, as mentioned above, avenging that earlier blowout loss in Gainesville with an 11-point win to end the regular season. But they alternated wins and losses in the final seven, and managed a 2-4-1 ATS mark.

The Vols covered against Florida on Sunday, but haven't had consecutive covers since winning and cashing against Texas A&M and Vanderbilt from Jan. 9-16. Tennessee hasn't covered three or more games in a row since opening 5-0 ATS from Dec. 8-21 in non-conference play.

The Vols head into this one with a 2-5 ATS mark across the past seven neutral-site games, and they're just 2-5 ATS over the previous seven games against winning sides. Of course, one of those covers was against Florida in the past week.

Inside the Stats – Florida Gators

The fact these teams just played in Knoxville on Sunday bodes well for the Vols, although they haven't been able to string together consecutive strong games in about a month. Tennessee is an obvious NCAA Tournament team with good defense, but how far can they go with that lack of consistency?

Florida has a feel for the rims and atmosphere at Bridgestone Arena, too, so that counts for something. They roughed up Tennessee earlier this season, but they're just 4-4 SU/2-6 ATS across the past eight games. The only thing you can be sure about is this will be a defensive grind.

WHERE TO BET FLORIDA-TENNESSEE