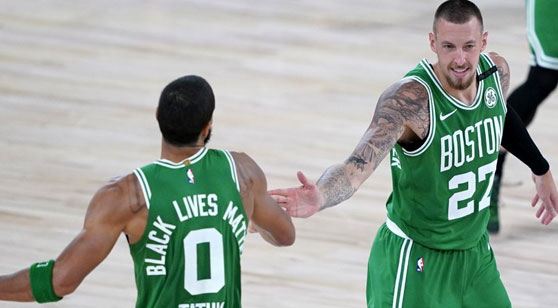 The Celtics look to bounce back against the 76ers after losing three of four meetings this season. (AP)

The Atlantic division race has been a tight one all season and was the only division in the league to send four teams to the playoffs. The defending champion Raptors eventually pulled away for the division title, while the Nets overcame injuries to finish as the seventh seed. In between, the long-time rivals from Boston and Philadelphia are first round opponents and one will get knocked out in this best-of-seven series.

The Celtics finished as the third seed in the Eastern Conference in their first season with Kemba Walker as their point guard. Boston has won its first round series in each of the last three postseasons, but face the 76ers in the opening round for the first time since 2002 (won by the Celtics, 3-2).

The 76ers posted the best home record in the league at 29-2 prior to the shutdown, as Philadelphia struggled on the road by going 10-24. Philadelphia had a shot at the fourth or fifth seed in the Eastern Conference, but the loss of Ben Simmons to a knee injury early during bubble play moved the Sixers down to the sixth seed.

Boston's most notable wins inside the bubble came against Toronto, 122-100 and a 128-124 victory over Portland. The Celtics built a 40-point lead in the blowout of the Raptors, while blowing a huge lead to the Blazers before holding onto the narrow victory. The Celtics lost the opener to the top-seeded Bucks, 119-112, while also falling to a beat-up Heat squad, 112-106 as five-point favorites.

Philadelphia started 1-5 ATS in the bubble, which included close losses to Indiana and Portland. The only win and cover in a meaningful game came against Orlando on August 7 in a 108-101 triumph as five-point favorites, while the 76ers blew out the Rockets in the finale as Philadelphia had already locked up the sixth seed.