The NBA Playoffs first round action continues Friday afternoon with the No. 3 Denver Nuggets and No. 6 Utah Jazz tied at 1-1 in their opening series.

The Utah Jazz evened up their first round series with the Nuggets on Wednesday evening behind another spectacular performance from Donovan Mitchell. Despite a heartbreaking overtime loss in Game 1 countered by a dominant Game 2 victory, the Jazz are still one and a half point underdogs heading into Friday’s affair.

The ‘over’ has connected in two consecutive games to start the series between these two teams, and bettors are backing a change in pace heading into Game 2 as the total opened at 220, but has stooped down to 218.5 at most books as of Thursday morning.

This is one of the few first round series that still has some real betting value as the series is tied 1-1 and Denver (-160) enters Game 3 still the favorite over the Jazz (+140). 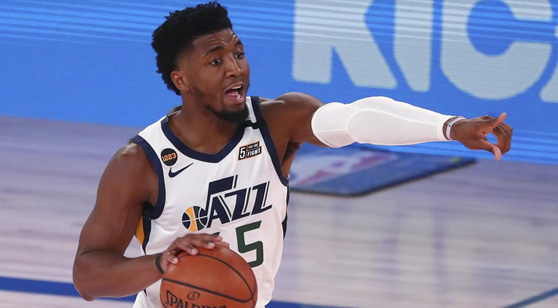 Donovan Mitchell and Utah exploded for 124 points in Game 2 yet they're still listed as underdogs to Denver in the series. (AP)

Nikola Jokic and the Denver Nuggets appear to be missing Will Barton and Gary Harris much more than they anticipated defensively, as all five of the Jazz starters tallied a field goal percentage over 50% on Wednesday, led by Mitchell who scored 30 points, knocking down six out of seven three-pointers.

Denver had absolutely no answer for Utah at any position on the floor and appeared to be completely disgruntled in every aspect in the 124-105 rout. Porter and Jokic had solid offensive performances, but it will never be enough if they allow 77 points over the two middle stanzas of a contest against a team that also has All-NBA defensive talent.

The Jazz shot 51% from the field and 45.5% from three-point land in Game 2 and the Nuggets are going to have to play much tighter D if they want to keep up with Utah in Game 3.

We've seen plenty of wire-to-wire wins and covers in the NBA Playoffs and Game 2 of this series added to those outcomes. Utah exploded in the second and third quarters for a combined 77 points to lock up the game and winning tickets.

Nuggets vs. Jazz
How to Handicap Game 3

Denver got exposed defensively in Game 2 as they allowed 124 points to the Jazz who are typically much more solid than that on that end of the floor.

Jamal Murray or somebody else in the Nuggets backcourt is going to have to step up and shadow Mitchell at all times on defense because they can not afford to let the Utah backcourt to shoot over 50% from the field and 45% from behind the arc for the rest of this series, or they are in trouble.

They key for the Nuggets heading into Game 3 MUST be containing Mitchell and keeping Utah’s team points total down to make Friday’s contest more competitive than their previous tilt.

After losing in overtime on the shoulders of a 57-point performance from Utah’s superstar, 23-year old shooting guard, the Jazz were able to finally put it all together against Denver, dominating the Joker and company in Game 2 of this seven game set by a 19-point margin.

The Jazz had been on the cusp of knocking off the Nuggets for four straight games now, losing their first three regular season contests by a combined total of 11 points against Denver, then losing their first playoff matchup to them in overtime, making them 0-4 on they year against the Nuggets before Utah’s 124-105 win on Wednesday.

Utah got 56 combined points out of Mitchell and Jordan Clarkson in the backcourt in their Game 2 victory, and if they can tally a similar total to that on Friday, the Jazz should be in an ideal position to steal Game 3 as well.

Point-guard, Mike Conley hasn’t been sorely missed in his first two absences for the Jazz, as Clarkson has filled his role quite nicely, averaging 22 points off the bench in the first two games of Utah’s playoff run to accompany Mitchell’s highlight reel performances.

Barton and Harris are set to miss their third consecutive game of this series, as Denver’s defensive depth likely won’t improve heading into Friday.

This is a pivotal Game 3 matchup, as winner of the third game often goes on to win a series. I think the Jazz are actually the better team in this matchup, and will ultimately be the team to advance to the second round, despite still being listed as +140 underdogs to take the series. Give me the Jazz straight-up here at +110 odds to take a 2-1 series lead as underdogs against the Nuggets.