The Eastern Conference first round matchup between No. 2 Toronto Raptors and No. 7 Brooklyn Nets will continue on Friday as the pair meet in an afternoon matinee from the NBA Bubble in Orlando.

The Raptors own a 2-0 lead and saying this is a must-win spot for the Nets is a serious understatement.

The second-seeded Toronto Raptors own a 2-0 series lead over the sixth seeded Brooklyn Nets, and have now shifted to 10.5-point favorites heading game three after laying nine and half points on the opening line, despite failing to cover in their game two win on Wednesday afternoon.

Game 1 carried an offensive explosion of 244 combined points, which was followed by a combined total of 203 points in Game 2. Oddsmakers decided to meet them in the middle for this contest, sending out the 'over/under' at 223 but early action on the ‘under’ has brought that line down to 220.5 total points at most books.

What started as an “extremely unlikely” line of +5000 for Brooklyn to advance to the second round, has turned into a “pretty impossible” line of +6000 heading into Game 3, as most books have indicated they have lost all of the little hope they had in Brooklyn heading into this series. 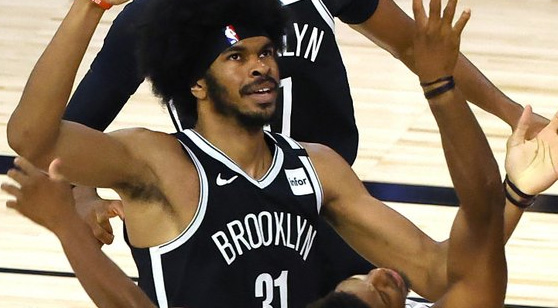 After allowing 134 points in Game 1, the Nets defense held the Raptors in 104 in Game 2 but still managed to lose the game. (AP)

The Nets jumped out to an early lead in Game 2 on Wednesday afternoon behind a 10-point, five-assist, two-rebound first quarter performance from Caris LeVert, carrying his team to a five point advantage by the end of the quarter and taking a lead into the halftime break.

The second-half was a much different story though, as the best defensive team in the league (Toronto Defensive Rating – 104.7) showed their true colors down the stretch, holding Brooklyn to just 46 points after the break.

Toronto’s backcourt dominated on both sides of the floor in the second half, Fred Van Fleet and Kyle Lowry outscoring LeVert and Harris 26-12 in the final two stanzas, ultimately leading to Toronto’s 104-99 victory and a 2-0 series lead.

Not a lot of sweat was dripping in Game 2 for bettors who backed both the underdog and the 'under' in this series. Toronto chasers were able to stop some of the bleeding with a fortunate second-half cover.

Raptors vs. Nets
How to Handicap Game 3

Unlike their wire-to-wire dominating performance in Game 1, Wednesday's matchup carried its hiccups for the Raptors as they struggled to get the offense going early and trailed for the majority of Wednesday’s contest.

There was never a glimpse of doubt in Coach Nick Nurse’s eyes though, as he was able to rally the troops in the second half to put out a remarkable display of defense, stifling the Nets to 19 points in the 4th quarter. Having to play that tight of defense is exhausting, especially over the course of the marathon the NBA playoffs tends to be for good teams.

Toronto needs to come out and punch Brooklyn in the mouth early in Game 3 and save some of its starters legs for the rounds to come.

The betting outlook for the Nets at this point looks gloom to say the least, as they trail 2-0 and their starting shooting guard decided to pick up and leave the bubble on Thursday to attend to a non-medical related issue.

Aside from the two third quarters in this series, Brooklyn has been extremely underwhelming offensively, averaging just 24.5 points per quarter in the other six stanzas of this series.

Money is not safe in the Nets hands as a team on Friday afternoon, but it does set the stage for LeVert and Allen to have big games on the stat sheet, because somebody has to score/rebound, right?

Everything that can go wrong, will go wrong for the Nets as they are now really scraping the bottom of the barrel in their backcourt now down Irving, Dinwiddie, Crawford, and Harris. Look for Van Fleet and Lowry to have a field day as the Nets become even more short-handed than they were before at the guard position.

Toronto came out of the gates lethargic defensively on Wednesday afternoon after its 134-110 blowout victory in Game 1, falling behind Brooklyn in the early stages of their second matchup. The Nets now lose their best perimeter scoring threat heading into Friday, after being completely smothered in the fourth quarter of Game 2's setback.

I expect the Nets to struggle mightily on the offensive end without their best floor spacer, and for the Raptors to waste no time putting Brooklyn away in game three Give me the Raptors -10.5 in a game three rout.