An intriguing Game 3 will take place Saturday night when the No. 1 L.A. Lakers will meet the No. 8 Portland Trail Blazers in their first-round series, which is all locked up at 1-1 in the best-of-seven Western Conference matchup. 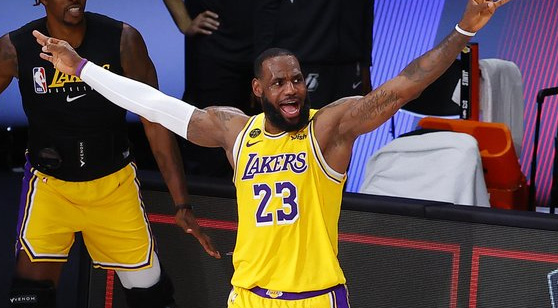 LeBron James and the Lakers will be looking to take control of their first round series against Portland on Saturday in Game 3. (AP)

After routing the Blazers 111-88 to in Game 2, the Lakers head into the third game of this set as seven and a half-point favorites, eyeing a 2-1 series lead in the first round of the Western Conference Playoffs.

These teams connected on the ‘under’ in consecutive games, and the opening total for Saturday’s contest is still set in the same neighborhood of 225 total points for this Game 3 rubber-match.

Damian Lillard has been cleared to play Saturday’s contest with medical protection on his hand, after dislocating his finger on Thursday night. Portland sits at +265 on the money line if you think it will be "Dame-Time" in Game 3 following his injury.

The numbers don’t even paint the whole picture of how bad the Lakers were offensively in Game 1 of this series, shooting 5 of 32 from 3-point territory and 35% shooting as a team in their 100-93 loss on Tuesday night.

But the Lakers rebounded in a big way in Game 2, stifling the Blazers to 88 points and just dominating in all aspects of the game, led by Anthony Davis who went for 31 points and 11 rebounds across 29 minutes in the contest.

Lillard was the key behind Portland’s Game 1 victory in the series, but he left the 3rd quarter of Game 2 with a dislocated finger, ending whatever hope was left for the Blazers in that game.

Coach Terry Stotts said on Friday that the All-Star will play in Saturday’s contest, but likely with a protective splint on, which is a sigh of relief for Portland fans.

The Lakers posted a wire-to-wire cover for bettors in Game 2 and they cashed tickets in both the first quarter and first-half, plus they held on for the second-half win and cover with a big third quarter.

The 88 points scored by the Trail Blazers was the lowest offensive output for them this season and it was just the eighth time that the club was held under 100 points in the 2019-20 campaign.

Lakers vs. Trail Blazers
How to Handicap Game 3

The Lakers defense has been phenomenal so far in this series, limiting this high-powered Blazers offense to an average of 94 points over the opening two matchups.

LeBron James and company had no business being within reach down the stretch of Game 1, but the way they stand defensively keeps them in games, even on their worst shooting nights.

King James has been nursing a sore groin for the majority of his time in Orlando so far, so I would look to AD again here to go over his player prop totals again in this Game 3 tilt, as he has tallied 28 and 31 points in the opening matchups.

The Lakers had the lowest average points per game in the eight re-seeding games in the bubble and are now 12th out of the teams remaining 16 teams in scoring in their first two playoff games.

Hopefully Lillard is actually okay and not just trying to be a tough guy, because if he isn’t able to produce at the level he has been producing at prior to this hand injury, Portland is in big trouble.

Dame being legitimately injured would be the worst possible thing for this series as Los Angeles would cruise to the second round, after showing us how great this series could’ve been in Game 1. Hopefully, that is not the case. I’m sure we will learn more leading up to game time regarding the severity of Lillard’s injury.

The big man trio of Davis, Javale McGee, and Dwight Howard combined for 50 points down low for LA in Game 2.

Jusuf Nurkic and the frontcourt are going to have to step up defensively for Portland in Game 3 if they want any chance of holding off the Lakers, now that they have to compensate for their superstar being banged up.

Obviously, the real story here is Lillard dislocating his finger in Game 2 and still being left on the injury report for Game 3. Portland’s coach has confirmed he will play on Saturday night, possibly with medical protection on his injured hand.

The Blazers did get bad news on Friday when they learned Zach Collins needs season-ending ankle surgery.

Rajon Rondo is listed as a game-time-decision for the Lakers, as there is a chance LA may get to add some depth to their backcourt heading into the third game of this seven-game set.

The largest amount of total points scored by either team in this series was 111 points, and that was by the Lakers. The 'over/under' of 225 comes from the averages of regular season matchups between these teams which isn’t indicative of how either of these teams have been playing in the playoffs.

Give me the ‘under’ here as I expect the Lakers to gain a 2-1 edge, in a low-scoring Game 3 battle.