The Indiana Pacers face a must-win situation on Saturday afternoon when they look to avoid a 3-0 deficit to the No. 5 Miami Heat as the pair meet in Game 3 of their opening round series in the Eastern Conference from the NBA Bubble.

The Miami Heat covered a four and a half point spread in consecutive games to open the series, and now sit as five-point favorites for their Game 3 tilt with the Indiana Pacers on Friday afternoon, as Malcom Brogdon and company try to avoid going down into a 0-3 hole in the playoff bubble.

After cashing the ‘under’ in back-to-back games, the oddsmakers have decided to match these teams highest point total so far in this series, setting the total points OU at 214.

Indiana has fallen to +1100 underdogs to advance to the second round of the playoffs heading into Game 3, as the Warren-Oladipo-Brogdon scoring trio has been stifled so far in this series. 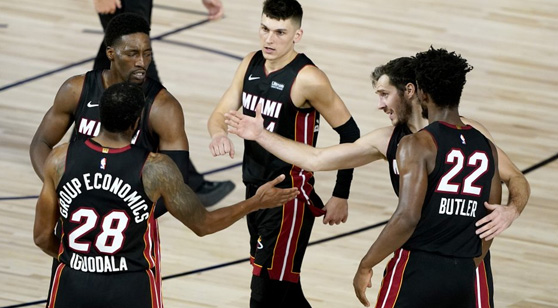 Miami has won and covered each of its first two matchups against the Pacers and its favored to win Game 3 on Saturday. (AP)

The Game 2 matchup between the Pacers and the Heat was the same song, just a different dance, as Miami covered and the ‘under’ cashed for the second straight contest in this series.

Indiana may be the higher seed in this matchup, but it hasn’t looked like it at all, as Miami has been the wire-to-wire better team over the first two games.

Coming into the series, all the talk was about Butler vs. Warren, but Jimmy Buckets put a quick end to that conversation, aggressively asserting himself as the best player on the floor, averaging 23 points in the first two contests while clamping his counterpart. Butler has stepped up and taken this series by the horns so far.

If somebody doesn’t step up and go nose-to-nose with him in Game 3, there is no doubt the Pacers will find themselves in grave danger of a first round sweep following Saturday.

Thursday's matchup saw both teams come out of the gates slow but they managed to pick up the pace in the second-half and that helped bettors chasing 'over' tickets. Similar to the Game 1 outcome, Miami made more clutch shots and that earned the club another win and cover in this series.

Pacers vs. Heat
How to Handicap Game 3

It’s time to press the panic button if you are the Indiana Pacers as they have officially fallen into a 0-2 hole following their second straight performance under 102 total points to start the first round of the Eastern Conference Playoffs.

I’m not sure who ticked off TJ Warren during the NBA shutdown, but the scoring rampage he was on in the re-seeding games appears to have been forcefully put to an end by Jimmy Butler and company as he scored just 14 points on Thursday afternoon.

Brogdon and Oladipo’s struggles have been overshadowed by Warren’s explosions for the majority of the time in the bubble so far, but now that TJ has returned to earth, the Pacers are having a lot of trouble scoring the basketball.

VO and Brogdon are going to need to take back control of their team in Game 3 if they want any chance of making this a competitive series.

The Miami Heat find themselves up 2-0 heading into Saturday, following their 109-100 victory on Thursday afternoon, and Eric Spoelstra’s team would love nothing more than to get all the rest they possibly could before their potential second round series matchup with Milwaukee.

Miami has gotten it done with its defense so far in this series, holding the Pacers to an average of just 100.5 points over the first two games of the opening round. Duncan Robinson led the way for the Heat in Game 2, tallying 24 points on seven of eight from 3-point territory.

Look for him to stay hot again tonight, because when it rains for Robinson, it typically pours.

There is no doubt the Pacers have missed All-Star, Domantas Sabonis dearly in this series as they have struggled to get anything going on the offensive side of the ball against the Heat.

Myles Turner has averaged just 13 PPG. so far in this series, and its really a shame we didn’t get the privilege of seeing this series with Sabonis in it, because I really believe this series would’ve been more competitive in the first two games if Turner would’ve had his partner in crime down low with him.

The Pacers have failed to score 25 points in six of the eight stanzas they have played in so far in the playoffs. At this point, I’m not quite sure if the Heat are playing lights-out defense or if the Pacers are just stinking up the joint shooting the ball.

Probably a little bit of both. Give me the Heat here -5 to go up 3-0 and try to get some rest before their potential second round matchup with the Bucks.