The second-seeded Los Angeles Clippers will look to build on their 2-1 first-round series lead over the No. 7 Dallas Mavericks when the pair meet in Game 4 on Sunday afternoon from the NBA Bubble in Orlando, Florida. 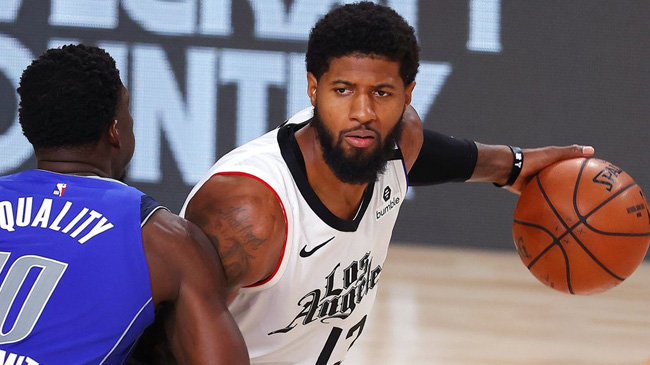 Paul George and the Clippers have been installed as very healthy favorites for their Game 4 matchup against the Mavericks. (AP)

With Luka Doncic being listed as questionable for the Maverick’s Game 4 tilt with the Los Angeles Clippers, Dallas enters Sunday’s contest as eight and a half point underdogs, already in a 2-1 hole against Doc Rivers team.

After averaging 237 total points per game so far in this series, the ‘over-under’ is set at OU 231.5 for Game 4, following ‘over’ tickets cashing in consecutive contests.

Dallas (+600) is currently listed as steep underdogs to advance to the second round of the playoffs, but if Luka is cleared to play Game 4, look for that line to move.

This series has been a back-and-forth affair so far, with the Mavs and Clippers trading off games to open the series, followed by LA’s 130-122 victory on Friday night.

Kawhi Leonard has picked up right where he left off last year’s NBA Finals, averaging 33.3 points, 10.3 rebounds, and 5.3 assists per game in the opening three games of this series, despite Paul George’s struggles.

The Claw is a world class scorer when he is on his A-game, and it has been on full display in his last two contests, going for 35+ in consecutive games. Kristaps Porzingis came into Game 3 banged up, playing with a bruised heel, but didn’t appear bothered as he went for 34 points and 13 boards on the Mavericks Game 3 loss.

Kristaps Porzingis may be okay, but Luka exited in the third quarter of Friday’s contest and will likely be a game-time decision for Game 4, drastically changing the landscape of this entire series. Luka’s status carries a heavy weight in the outcome of this game. Make sure to keep your eyes open for news regarding his injury.

What looked like another easy 'under' ticket on Friday turned out to be an easy 'over' winner. After combining for 46 in the first quarter, the two teams went off for 76, 65 and 65 combined points in the final 36 minutes.

L.A. exploded for 45 points in the second quarter and that was the difference but Dallas did close the game strong and its 37-28 effort in the last quarter helped bettors cash second-half tickets.

Clippers vs. Mavericks
How to Handicap Game 4

It might be time to retire the nickname “Playoff-P” for the time being, as George has averaged just 12.5 points in his last two games for the Clippers.

Despite PG13’s struggles, Los Angeles still owns a 2-1 series lead, and is now eyeing a third victory against the banged-up Mavericks.

The Clippers are averaging 124 points in their playoff victories, and if a healthy Luka suits up on Sunday, Doc Rivers team is going to need more production out of #13 in what is likely to be considered a “must-win” game for the Mavs.

Ride Kawhi to go over 30.5 total points in this Game 4 matchup, as he has averaged 35.5 points over his last two contests.

If the Mavericks are going to even up this series on Sunday night, it is crucial for Doncic to be in the lineup for Dallas, even if it is as a floor spacer or decoy.

Luka has the highest usage rate in the NBA through the first three games of the playoffs (36.7%), and if he is unable to go in Game 4 it will be devastating for Rick Carlisle’s team.

Picking a side in this game if a tough call, because if Doncic is healthy and able to play, I like the Mavs to cover here and maybe even win; but if Luka doesn’t play, the Clippers should cake-walk to a 3-1 series lead.

My advice on the spread for this game is to stay away until the Doncic’s status becomes clear.

Porzingis is still listed on the injury report with a bruised heel for the second straight contest, but there isn’t much concern surrounding his status as he went off for 34 points on Friday. Luka is a different story though, as he is listed as questionable, and Dallas likely won’t reveal news regarding Doncic until closer to tip off.

There is also a chance the Clippers could get Patrick Beverley back, who has been recovering from a calf injury for the extent of this series, so keep an eye our for all injury news as we approach the start of this one.

These teams have gone ‘over’ 231.5 points in consecutive games now, with the only ‘under’ coming in their total of 228 points scored in Game 1.

The Clippers are either going to see a banged-up version of Luka defensively, or a much worse replacement if he is unable to go on Sunday. Regardless of whether Doncic plays or not, I expect Dallas to play with a sense of urgency and score a lot of points in Game 4.

Give me the ‘over’ here, as I expect these teams to cash ‘over’ tickets for the third straight contest.