The top-seeded Los Angeles Lakers will look to win their third straight playoff game on Monday when it meets the No. 8 Portland Trail Blazers in Game 4 of their first-round series.

After Portland captured Game 1, the "Purple and Gold" have muscled their way to victories in Game 2 and 3 in this best-of-seven Western Conference matchup. 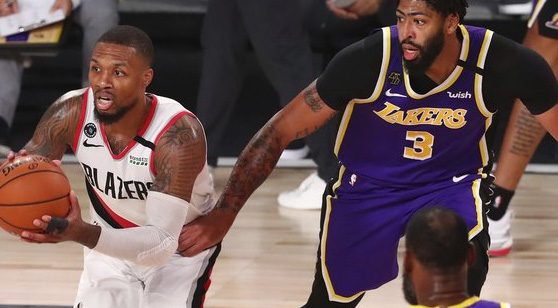 The Lakers have picked up their defensive efforts in Game 2 and 3, holding Portland to 88 and 108 points in those games. (AP)

After routing the Blazers 111-88 to in Game 2, the Lakers head into the third game of this set as seven and a half-point favorites, eyeing a 2-1 series lead in the first round of the Western Conference Playoffs.

These teams connected on the ‘under’ in consecutive games, and the opening total for Saturday’s contest is still set in the same neighborhood of 225 total points for this Game 3 rubber-match.

Damian Lillard has been cleared to play Saturday’s contest with medical protection on his hand, after dislocating his finger on Thursday night. Portland sits at +265 on the money line if you think it will be "Dame-Time" in Game 3 following his injury.

There are three true “superstars” in this opening round matchup of the Western Conference Playoffs, and so far, each one has had their big night. Damian Lillard tallied 34 points, five rebounds, and five assists in Portland’s 100-93 stunning Game 1 victory.

Game 2 belonged to Anthony Davis, as he went for 31 points and 13 rebounds in the Lakers 111-88 rout of Portland in the contest Lillard dislocated his finger in.

Then finally, the LeBron James we have been waiting to see all summer came out to play on Saturday, exploding for 38 points, 12 rebounds, and eight assists in LA’s Game 3 comeback victory.

Lillard didn’t appear to be bothered by his injury on Saturday, exploding to the basket and converting and-one attempts with his injured hand, while also shooting 5-11 from 3-point territory.

There was a lot of chatter surrounding the Blazers after Game 1 of this series. Game 4 should determine whether they were worth all the hype.

After a great first-half, Portland ran out of gas in the final 24 minutes and that cost bettors backing the underdogs. The 'under' barely cashed again, the third straight time in this series although the combined 224 points was the most scored.

Lakers vs. Trail Blazers
How to Handicap Game 4

The Lakers have been on the ballot for “most disappointing team” in the bubble for quite some time now, but I think we can go ahead and take them off that list following explosions from AD and LeBron in consecutive games, to take a 2-1 series lead over Portland.

The Lakers have still technically underachieved though, covering in only one of their playoff contests thus far, and that was the contest Lillard exited. The Lakers are having to win games right now with pure defense, which they are very capable doing, but is taxing on 35-year old’s like LeBron over the course of a seven-game series.

There’s no doubt that you could probably hear a pin drop in the city of Portland when Dame exited in the third quarter of the Blazer’s Game 2 contest with the Lakers, but Lillard’s 34-point performance on Saturday night was definitely a big sigh of relief for them, even though they ended up on the losing side of the scoreboard, as he paced his team in scoring on Saturday.

Portland actually had its best offensive night of the series so far in their Game 3 loss, scoring a series-high 108 points on 41.1% shooting.

Saturday night made the Blazers 2-1 ATS in this series, and proved that they are still dangerous heading into Game 4, even with their superstar being banged-up.

Portland power forward, Zach Collins, will need season-ending surgery on his ankle, officially ending his time in the Orlando bubble, which is another devastating blow to the Blazers interior. Wenyen Gabriel is expected to start in place of Collins to add versatility on the defensive side of the ball.

These teams made ‘under’ bettors sweat it out in Game 3, tallying 224 total points in the contest, but aside from a third quarter, 40-point explosion from Los Angeles, this was another low-scoring matchup.

The Lakers averaged just 25.3 points in the other three stanzas of the game and Portland scored under 110 points for their third straight contest in Game 3. My bet is on this game staying ‘under’ too, as I expect these teams to combine for under 224.5 total points for a fourth consecutive contest.