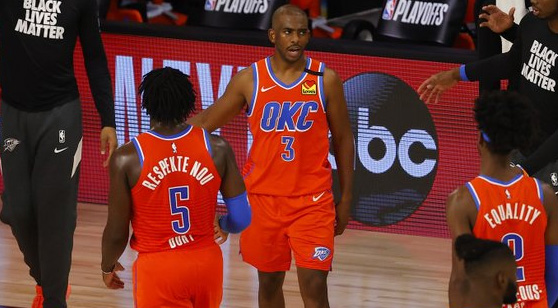 Oklahoma City avoided a 3-0 first round series deficit by defeating Houston 119-107 in overtime in Game 3 on Saturday. (AP)

The Thunder, again, enter Game 4 as three-point underdogs , despite the Rockets potentially getting Russell Westbrook back from injury who has missed the first three games of this matchup with a quad injury.

‘Over’ tickets have cashed in two out of three contests so far in this series, but that wouldn’t be the case if it wasn’t for overtime in Game 3, as these teams combined for just 208 total points in regulation during Saturday’s tilt. The ‘over-under’ for this matchup sits at 220.5, with the early action coming in on the ‘under.’

Oklahoma City’s Game 3 victory paid dividends to its series odds, jumping from +700 ‘dogs to advance to the round, all the way up to +400 after their display on Saturday.

All kinds of familiar faces are flying around the court in this series as James Harden and Chris Paul (former teammates), square off against each other in the Western Conference first round.

It feels like the Houston is playing on a slippery slope here as they elected to cautiously hold Russell Westbrook out of their Game 3 loss on Saturday, and now find OKC within striking distance, trailing by just one game in this series.

Harden led the way for the Rockets on Saturday, tallying 38 points, seven rebounds, and eight assists before fouling out in overtime against his old team.

CP3 showed that he still has what it takes to lead his team to victory in big games, scoring 10 crucial points in the fourth quarter and overtime on Saturday, but there is no doubt he is going to have his hands full defensively if Russ is able to return.

What looked like another win and cover for the Rockets quickly evaporated in the second-half of Game 3. Oklahoma City wasn't spectacular in the final two quarters but it did enough offensively to capture the win and cover as a short underdog.

Total bettors playing the 'over' appeared to be on the right side at halftime with 120 first-half points posted but back-to-back quarters under 50 points had them on the ropes. Despite Houston being held to three points in overtime, the extra session helped the high side connect.

Thunder vs. Rockets
How to Handicap Game 4

The big news for the Rockets in this one is that they could possibly get Westbrook back for Game 4, which might just put the icing on the cake in this series, already up 2-1 SU and ATS.

The Rockets have the Thunder on the ropes here, with Oklahoma City’s only victory coming in an overtime game that the Beard fouled out in. Harden has shouldered an enormous load for Houston offensively so far in this series, and any kind of volume relief should pay dividends to his efficiency stats.

Houston made just one more three-pointer than Oklahoma City in its Game 3 loss on Saturday, don’t count on the 3-point totals to be that close on Monday if Westbrook comes back.

It’s easier said than done, but things are pretty simple for the Thunder if they want to make it out of this series; they just have to outshoot the Rockets. Houston doesn’t even bother starting a center.

They come straight at teams with a run-and-gun, three-point bombing style of play and just challenge opponents to try to keep up with them. That style of play gave CP3 some trouble back when he played for Houston, and still continues to give his current team struggles as Oklahoma City has half the sharps-shooters the Rockets currently have.

Now, with Steven Adams listed as a game-time decision, the Thunder could be in deep trouble if they lose their scoring presence inside.

After gaining a 2-0 lead, the Rockets elected to cautiously hold Westbrook out of their Game 3 loss on Saturday. All signs point to him making his playoff debut on Monday as he is now listed as a game-time decision for the contest.

Steven Adams exited the third quarter for the Thunder with a bruised knee and he's also very questionable for the contest.

The spread remains Houston -3, despite the Rockets chance of potentially getting Westbrook back. I like Houston to win this game, even if Russ doesn’t play, as I’m sure Harden will be seeking revenge after fouling out in Houston’s Game 3. Give me the Rockets -3 here to create some space between themselves and OKC, with or without Westbrook.