The 2 vs. 7 matchup in the Western Conference has now become a best-of-three series as the upstart Dallas Mavericks are locked up 2-2 with the heavily favored Los Angeles Clippers.

The pair will meet in a Game 5 matchup on Tuesday from the NBA Bubble in Orlando, Florida. 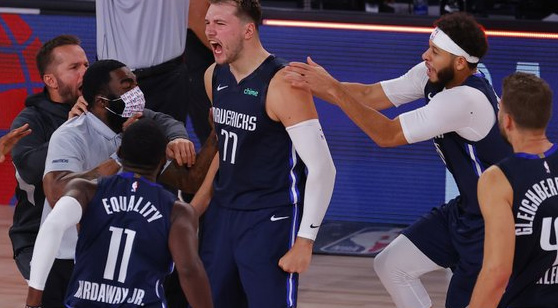 Luka Doncic and the Dallas Mavericks outscored the L.A. Clippers 77-67 after the first-half in their Game 4 victory on Sunday. (AP)

After evening the series 2-2 in thrilling fashion on Sunday night, the Dallas Mavericks still remain six and a half-point underdogs for their Game 5 tilt with the Los Angeles Clippers on Tuesday night.

These teams have cashed ‘over’ tickets in three consecutive contests now, jacking up the ‘over-under’ for the fifth matchup of this series all the way up to 236.5.

Despite Los Angeles dropping its second contest out of four to Dallas and the struggles of Paul George, the Clippers still head into Game 5 as heavy favorites (-360), compared to the Mavericks steep underdog line (+260).

The pendulum swung right back in the other direction in Game 4, as Luka Doncic buried a cold-blooded, step-back three-pointer in the face of Reggie Jackson with time expiring in overtime to seal the Mavs' 135-133 victory on Sunday. Heading into the game, it was unclear whether Luka was even going to participate in the contest with a sprained ankle, but he sure did play; tallying 43 points, 17 rebounds, and 13 assists, including the game-winner in Game 4.

His partner in crime though, Kristaps Porzingis, who appeared to be the least concerning Maverick on the injury report, was scratched before tipoff on Sunday with a knee issue and is listed as questionable again for Tuesday’s contest.

Aside from the occasional Lou Williams scoring rampage, Kawhi Leonard is doing just about everything Clippers while getting virtually no help, averaging over 32 points and 10 rebounds per game, trying to single-handedly propel his team his team to the second round. Doncic has shown us that it is going to take more than one Clipper take down the pesky Mavericks, as they were able to take down a full-strength LA team without their second-best player Sunday evening. George and company need to pull it together on Tuesday night to avoid very dangerous territory in this Orlando playoff bubble.

Some bettors might call it a collapse, while others will call it a comeback. Either way, Dallas fell behind early as Los Angeles cashed both first quarter and first-half wagers, rather easily too.

The Mavericks got hot in the final two quarters and carried that momentum into overtime. The 'over' cashed before the extra session started as the game was locked up at 121.

Mavericks vs. Clippers
How to Handicap Game 5

After trailing in Game 4 by eight points heading into the halftime break, the Mavericks came out of the locker room looking like they had something to prove in what was a must-win game for them, outscoring the Clippers 35-19 in the third quarter, ultimately forcing overtime in this tilt.

If you would have asked me at the start of this series if I would rather have Luka or Kawhi on my team, I would have told you Kawhi…but Game 4 officially has me rethinking that with Luka tallying 43 points, 17 rebounds, and 13 assists in the Mavs' victory on Sunday. The second-year player has really proven that he can stand toe-to-toe with guys like Kawhi in high-pressure situations, his only problem is the health and skill of his supporting cast.

The Mavericks are already at a talent disadvantage in this series, they can’t afford to be losing guys like Porzingis down the stretch against the Clips if they want a chance to compete.

It’s honestly a wonder that Los Angeles still has this series knotted up, given how bad George has played in the first four games of this series. After signing a four year max free agent deal, the superstar has averaged just 11.3 points per game over his last three contests and his team tends to rely on him heavily for offense. The Clippers, who were built to be this defensive powerhouse led by the Claw and PG13, appear to be caught off guard by this run-and-gun Dallas team that is notorious for playing flimsy defense.

All of that being said, the Leonard and company head into Game 5 with a clean slate, following four games in which they did not even scratch the surface of their potential as a unit. When it comes together for Los Angeles, it really is a beautiful thing, as they have covered in both of their playoff wins so far. They will try to put it together again on Tuesday in a crucial Game 5 showdown.

The majority of the injury concerns leading up to Game 4 swirled around Luka, as he was the one who exited the third quarter of Sunday’s game with an ankle injury, but Kristaps was the one who ended up missing the Mavericks' last contest. Porzingis received an MRI on his knee and is listed as a game-time decision for Game 5 as he awaits results.

Beverley is also listed as a game-time decision for this contest, but Doc Rivers hinted at him missing Game 5 in a press conference following Sunday’s loss.

The Mavericks have been a tough first round matchup for the Clippers so far, but I believe that ends on Tuesday night. Doc Rivers' team is the better unit in this series by a healthy margin, and they haven’t really shown it yet now knotted up 2-2.

PG13 has struggled mightily in this series, but I have faith that he will figure it out, and whenever he does, it will send the Clippers over the edge as a team. Give me the Clippers -6.5 here as I think “Playoff P” will re-emerge and be the difference maker for his team in Game 5, reminding the world of how great the George-Leonard combo can actually be.