The second round of the NBA Playoffs in the Western Conference will begin on Thursday with the 2-3 matchup as the second-seeded Clippers face the No. 3 Nuggets in Game 1 of their best-of-seven series. 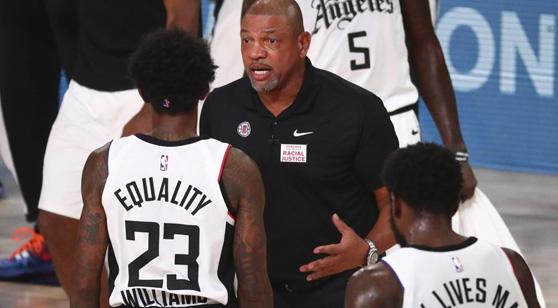 Doc Rivers and the Los Angeles Clippers advanced to the second round by defeating the Dallas Mavericks in six games. (AP)

It took every last second in Tuesday’s series finale between Denver and Utah to determine a winner, but a late-game Donovan Mitchell turnover led to a two-point Nuggets lead, which led to a Mike Conley missed 3-pointer at the buzzer, as the Jazz fall in a heart-breaker 80-78.

Denver will now face the ever so dangerous Los Angeles Clippers, who had a little more trouble putting away Dallas than originally anticipated, but lacks no confidence heading into the Western Conference Semi-Finals.

Even after the Maverick’s detrimental loss of Kristaps Porzingis in the middle of the opening round, it still took LA all of six games to put an end to the “Luka Doncic Show,” as the second year player out of Slovenia shattered playoff-debut records throughout the entirety of the series, but wasn’t nearly enough to butt a dent in the armor of Doc River’s team.

The Nuggets should pose as a tougher matchup for the Clippers on both sides of the ball as Dallas views Luka’s offense as its primary source of defense in most contests. We will see just how tough this young, Nuggets team can actually be in this second round series as their emotions their emotions are riding higher than ever coming off a thrilling Game 7 victory.

The second-seeded Clippers opened Thursday’s Game 1 contest at most books as five and a half point favorites against Denver, but that number has climbed all the way up to Los Angeles -8, as tickets continue to come in on Doc River’s team like crazy.

The ‘over’ is 2-1 in the series matchup so far in this series, so the oddsmakers decided to lean towards the high-side for the total in this matchup, setting the line at OU 223 points.

The Nuggets got the benefit of the doubt from books in their first series, being listed as moderate -200 favorites against the Jazz, but Vegas is not giving them the same love with this series price, listing Denver as a +900 underdog to advance to the Western Conference Finals.

So far this season, the Clippers have been the superior team when these teams meet up, going 2-1 SU and ATS against Denver. The ‘over’ is also 2-1 in this matchup, with the only ‘under’ coming in the Denver victory in which Paul George did not participate in.

The only fair way to evaluate the upcoming matchup we have at hand is by diving into the games George and Leonard both played in, which Los Angeles won by a combined average of 21 points per game.

The Clippers and Nuggets play a similar style of basketball, but LA’s backcourt is just much better defensively and has exponentially more firepower on offense, led by PG13 who has averaged over 25 points per game in his two contests versus Denver.

Murray’s 10 days of fame was fun while it lasted, but I believe the writing is on the wall for Denver after seeing how routine thumping the Nuggets appeared to be for the Clippers in their previous meetings this year.

Nuggets vs. Clippers
How to Handicap Game 1

It appeared the Nugget’s season would be abruptly coming to a halt following their 129-127 Game 4 loss to the Jazz in first round of the Western Conference Playoffs.

However, Denver fans got to watch their young shooting guard blossom into a superstar before their very eyes as he averaged 40 points per game in the last four games of the series to bury Mitchell and the Jazz.

Jamal having the best stretch of games in his young career was barely enough for the Nuggets to put away Utah in seven games, they will likely need that kind of production out of Jokic AND Murray to pull off the upset against the second-seeded Clippers in this bout.

Los Angeles lucked out a little bit in its first round series in the Western Conference Playoffs as 50% of the Luka-Kristaps duo exited the bubble with a knee injury following the Maverick’s Game 3 loss to the Clippers, in which the Dallas Unicorn went for 34 points and 13 rebounds in his final contest in Orlando.

Despite dropping two games to the seven-seed in the West, concern never swarmed the Clippers like it surrounded the Lakers, as any struggles River’s team had was either accredited to Doncic or solely blamed on the shooting woes of George.

This series is supposed to be a tune-up for LA’s potential upcoming showdown with the Lakers in the Western Conference Finals. Let’s see if Denver makes them sweat a little bit in this series, like Luka and company did in the previous round.

Point-guard Patrick Beverley missed five of six games against the Mavericks with a calf injury, and is listed for Thursday’s Game 1 contest as a game-time decision. Coach Rivers said in a presser on Wednesday he expects Beverley to be ready to go for the series opener with the Nuggets.

‘Over’ tickets have cashed in 13 of the Nuggets last 15 games, and they open a series with the Clippers on Thursday night that averaged 126+ points per game against the Mavericks in the first round, as Los Angeles is now beginning to ramp up the offensive intensity the deeper we go in these playoffs.

Give me the ‘over’ here as I think Game 1 cruises over 223 points with the Clippers controlling the pace of this contest and Denver playing catch-up.

I thought the Nuggets had met their match when they squared off with the Jazz in the opening round of the playoffs and were staring down the barrel of a 3-1 deficit, but Murray was able to put his team on his back and become the best player on the floor for the remainder of the series, pushing his team over the edge in the matchup.

Unfortunately for Jamal, the Clippers have TWO guys capable of rising to the occasion and standing toe-to-toe with him, even when he is scorching hot like he was in Games 5-7 of the Jazz series.

It would be quite the accomplishment for Mike Malone’s team if they are able to steal two games from the Clippers in this series. I highly doubt they will though.