The Eastern Conference semifinals will continue on Monday and the 2-3 matchup between Toronto and Boston has now become a best-of-three series with the pair locked up at 2-2.

The third-seeded Celtics captured the first two games before the Raptors have rebounded with back-to-back wins. Even though these games are playing in the NBA Bubble from Orlando, the designated road team is now 4-0 in this series. 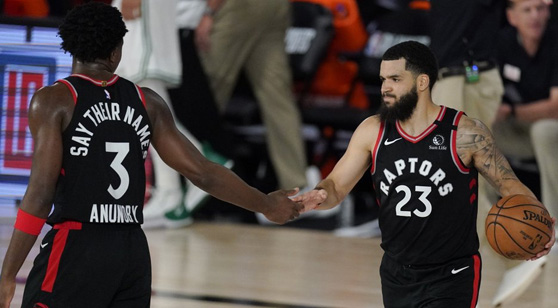 The Raptors stepped up defensively in their Game 4 victory, holding the Celtics to a playoff-low of 93 points. (AP)

After watching Boston combine consecutive victories with consecutive losses, Vegas decide to lean with the Raptors heading into this Game 5 bout, setting the opening spread at Toronto -1. Early action on the Celtics (65%) though, has led to the line swinging to Boston -1.

The Raptors and Celtics have split the first two games of this series SU 2-2, but the same can’t be said for the ‘over-under’ as this series has been all about defense, cashing ‘under’ tickets in all four games. The total for Game 5 sits more than three points lower than any ‘over-under’ we have seen so far in this series – OU 212.

The series price for Boston advancing to the next round soared all the way up to -500 following its back-to-back victories against Toronto to open the Eastern Conference Semis, but has now fallen all the way back down to -120 as these teams begin what has become a best of three series between inner-conference rivals.

The Celtics were just a couple ticks on the clock away from going up 3-0 on the second-seeded Raptors in the Eastern Conference Semis, but OG Anunoby was there to save the day with a game-winning buzzer beater in Game 3, which was followed up with a 100-93 victory on Saturday to knot up this series 2-2 heading into the fifth contest of this series.

Game 4 was a bit of a roller coaster ride as Toronto came out on top in the first and third periods of the contest and the Celtics caught the edge in the second and fourth stanzas.

Boston’s edge was not enough though as the Raptors rumbled to a 12-point advantage in the periods in which they were victorious compared to the Celtic’ five-point margin. This series has been a hard-nosed, defensive-minded battle so far as the ‘under’ has easily cashed in all four contests.

It will be interesting to see if these teams let up a little on defense on Monday, with a sixth matchup between these teams guaranteed now.

Game 4 was a tale of two quarters as Toronto scored 31 and 32 points in the first and third respectively and those efforts helped the Canadian club cash tickets.

While it looked like we would finally see an 'over' ticket in this series, a combined 40 and 39 points scored in the second and fourth quarters helped the 'under' improve to 4-0 in the first four games.

Celtics vs. Raptors
How to Handicap Game 5

A stunning four-game sweep of the defending champs appeared to be hanging in the balance as Brad Stevens’ group possessed a 2-0 series advantage, leading Toronto 103-102 during the closing seconds of Game 3 and in what felt like a blink of an eye, a two-game advantage became none.

The Celtics looked like the clear-cut, better unit in the first two games of this matchup, winning Games 1 and 2 by an average of 10.5 points per game, and controlled the pace/flow for the majority of Game 3 only to be nabbed at the last second.

Boston shot 7 of 35 from downtown in its Game 4 loss, and the odds of an efficient team on offense like the Celtics shooting at that clip in consecutive contests is not very likely – No need to sweat if you are a Celtics series bettor unless they drop another one here.

When Kawhi Leonard walked away from the Raptors this past off-season, many thought he would be leaving behind an empty shell of what was once a championship lineup.

And while that is true to an extent, Toronto clearly still has the swagger on defense of a title-contender, holding the Celtics to an average of 98 points per game in its last two contests.

Nick Nurse’s team might not have the quick-strike ability on offense that his championship unit from last season possessed, but if they can guard Boston tight on the perimeter and hold them to 20% shooting from deep like the Raptors did in Game 4, there is no reason Toronto shouldn’t be able to complete the full comeback in this series.

The Celtics are still without small-forward, Gordon Hayward, who has missed this series in its entirety with an ankle injury. He is not likely to return to the lineup before the conclusion of this round, but if Boston advances to the Eastern Conference Finals, look out for news regarding his status.

Picking a side in Game 5 between these Boston and Toronto lineups with very similar talent levels feels unwise as the Celtics have looked like the better team in the series so far, but the Raptors appear to have all the energy and momentum moving in their direction heading into Monday night.

I am going to ride with the ‘under’ here, as I think OU 212 is still too high of a number considering these teams have stayed under that total in all four contests so far in this series.