The Eastern Conference Finals will continue Thursday from the NBA Bubble in Orlando, Florida and the Boston Celtics will look to rebound after dropping an overtime setback to the Miami Heat in Game 1 on Tuesday. 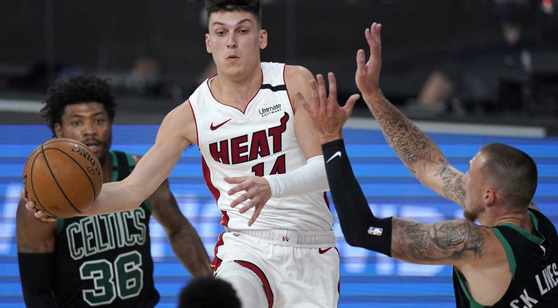 The red-hot Miami Heat pulled off the 117-114 overtime upset in Game 1, but that has not swayed the oddsmakers prior to the second contest of this series as the Celtics still head into Game 2 as two and a half-point favorites, already trailing Miami 1-0.

It has been a bad month to be an ‘over’ bettor in the 2020 NBA Playoffs so far, as the ‘under’ has cashed in 19 out of 26 post-season games inside the bubble.

Game 1 between the Celtics and Heat was not one of those games though, as these teams combined for 212 points in regulation – securing ‘over 209’ before they tacked on almost 20 more in the OT stanza. The line for Thursday night’s tilt fallen a little bit though, siting at a tempting line of OU 208.5.

It sure is a shame that there are no fans present to witness these grueling playoff battles in the bubble, because there is no doubt Boston’s TD Garden would have been rocking for Game 1 on Tuesday night.

It could have even been just what some of the Celtics’ young stars needed to push them over their competitive edge in overtime during their first battle with Miami in these Eastern Conference Finals.

No complaints from Brad Stevens’ corner though as Jayson Tatum and Marcus Smart combined for 56 points on 45% shooting in their 2020 ECF debuts – putting their team in a reasonable position to extend/win the game by closing the gap to a two-point differential in OT with just 12 ticks remaining on the clock.

Tatum had his game-tying dunk attempt emphatically denied at the rim by Bam Adebayo though, earning Erik Spoelstra’s team its first victory in an Eastern Conference Finals matchup since the LeBron James years (2014).

Heat vs. Celtics
How to Handicap Game 2

Miami came out of the gates flat and it looked like the Celtics might run away with the opening game of this series in the early-goings when they jumped out to a 26-18 first quarter lead. However, that shifted rather quickly as the Heat lit up the scoreboard in the second stanza for 37 points on 68.2 percent shooting to close out the half.

The Heat managed to post another insane offensive column of basketball in the fourth quarter of Game 1, racking up 35 points on 71.4 percent shooting to force OT in the final stanza of the contest.

The Heat needed every bit of the 72 points they dropped in the second and fourth quarters to force overtime in series opener, PLUS and insane block from Adebayo at the buzzer to seal the deal.

Not to rain on Miami’s parade here, but they cannot afford to ride the roller coaster in this series like they did in Game 1. The Heat need to string together four good quarters of basketball in Game 2 if they want to take a two-game advantage over a Boston team that has been devastatingly consistent this season. And somebody tell Duncan Robinson to stay out of foul trouble, holy cow.

No need to panic if you are a Celtics series bettor following their loss on Tuesday night, but if Boston fails to get over the hump again in Game 2 then it might be time to admit that Jimmy Butler and company are just on a magical run and may need to avoid betting against them at all costs for the near future.

I do not believe that is the kind of situation we are dealing with here though, as the heroes in Game 1 for Miami were Goran Dragic and Jae Crowder who went for a combined 51 points in the contest on 60% shooting.

The Dragic-Crowder-Butler trio shot a combined 10 of 18 from downtown in the contest, and I have a tough time believing they are going to be able to replicate those numbers over the course of a series.

I think Boston ultimately comes out on top in this series, but there is no doubt the Heat will make me eat those words if their role-players keep burying 3’s at a 55% clip the rest of the way.

Celtics forward, Gordon Hayward, has been upgraded to a “game-time decision” for Boston’s Game 2 tilt with the Heat on Thursday night.

The Butler product has not played since injuring his ankle in Game 1 of their opening round playoff series with the 76ers – his return should add some much needed size and scoring depth to Celtic rotation moving forward in this series.

I think the Celtics are the better team here and will ultimately represent the East in this year’s NBA Finals, so I am going to roll with Boston -2.5. I trust Tatum and his crew will bounce back in Game 2 and even up the series, barring another ridiculously efficient offensive performance from multiple Heat players not named Jimmy Butler.