Victory hung in the balance during the closing seconds of Game 2, but it finally became a reality for Mike Malone’s squad in Game 3.

The Denver Nuggets knocked off the Los Angeles Lakers, 114-106 on Tuesday night, and now have a chance to even up the series at two games apiece with another win in Thursday’s Game 4 showdown in the NBA bubble. 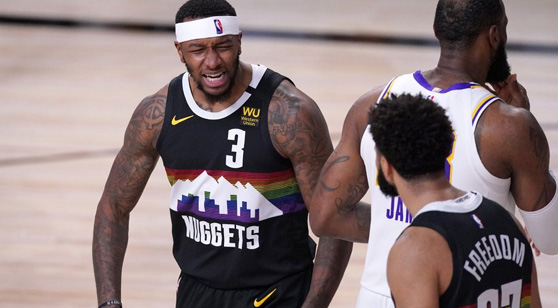 The Nuggets captured a wire-to-wire win in Game 3 but still trail the Lakers 2-1 in the Western Conference Finals. (AP)

Despite the Nuggets losing at the buzzer in Game 2, and cashing hefty ‘underdog money line’ tickets in their most recent contest with the Lakers, the oddsmakers are still rolling with the same line, Denver +6, for Game 4 of these Western Conference Finals.

After combining for an average over 222 points per game in the first three contests of this series and cashing ‘over’ tickets in two out of those three games, Vegas has decided to stay-put with the ‘over-under’ as well, leaving it at the same clip – OU 214.5.

Let me tell you, if I am asked to recall one in-game moment from this whole NBA bubble phase when this season is all said and done, I can almost guarantee my answer will be, “the night LeBron James and the Lakers were forced to double-team Jerami Grant in the midst of a title run.”

There is something ironically pleasing burning the image in my head of the former-Sixer forward going off 26 points on 63.6% shooting in a must-win game against a Laker team that typically guards his position relatively well.

Anthony Davis and LeBron were not the guys catching blame in the LAL locker room following Game 3, combining for 57 of their teams’ 106 points on 57.5% shooting for the contest.

It just simply was not enough to get it done against the Nuggets on this given night, as Jamal Murray poured in 10 fourth quarter points on 80% shooting to seal his team’s first Conference Finals victory in the bubble.

Denver came out firing in the first and second quarters on Tuesday in Game 3, posting 63 points at halftime.

That effort helped the 'over' connect in both the first-half and second-half, plus the rally by the Lakers in the second-half came up short and that hurt bettors chasing on L.A. (-6.5) in the final 24 minutes.

Lakers vs. Nuggets
How to Handicap Game 4

I figured the Lakers would take their foot off the gas a tad once they went up 2-0 on the Nuggets in this series, but not in the way they ended up doing it on Tuesday. I imagined Davis drawing tons of double teams and Lebron sharing the ball way too much – not Danny Green, Alex Caruso, AND Rajon Rondo stinking up the joint for the entirety of the contest.

LeBron was great in the contest and honestly looked like the only player on the court for LAL that wanted to win down the stretch of Game 3 – tallying another monster triple-double of 30 points, 11 assists, and 10 rebounds in the contest.

Davis ended up with 27 points on 53% shooting in the contest, but he looked downright lethargic for most of the game – corralling just two rebounds and bricking all four of his 3-point attempts.

This is likely just a case of Frank Vogel’s team a little too comfortable a little too soon against a very dangerous unit. I expect them to get it together and look like the Lakers from Game 1 on Thursday night.

Clearly, Denver’s ability to finally over the hump against Los Angeles did wonders for Nikola Jokic and company, as we saw the Lakers fall from -10000 favorites to represent the Western Conference in the NBA Finals, all the way down to -1400 favorites in the time frame of just a few hours during the Nuggets Game 3 victory.

The Nuggets entered the fourth quarter of Game 3 with an 18-point advantage, but even with that large of a lead, Denver still needed some late-game, 3-point heroics from Murray to close out the Lakers who rallied all the way back to just a three-point deficit by the middle of the last stanza.

Murray better bring the fourth quarter shooting he had on Tuesday night with him to the HP Field House for the whole contest on Thursday. There is going to be a frustrated King James waiting for him at the start of Game 4.

LeBron landed on the injury report heading into Game 3 with a nagging groin issue he has been nursing all season.

Los Angeles did not even bother putting him on the report for Thursday night’s contest after a lackluster performance across the board from the “Showtime” squad in their last matchup.

The Nuggets have already proven in these playoffs how much they like to go down 3-1 in series, and this is a golden opportunity for Denver to put its back up against the wall in a neutral post-season matchup one last time in the bubble.

Give me the Lakers -6 here, as I think LeBron and company puts Denver back in its place rather handedly in Game 4 after the LA role players slipped up and caught a bad case of the “lazy” in their Game 3 loss on Tuesday night.