Eastern Conference NBA action resumes Saturday night on NBATV with another primetime matchup between the Brooklyn Nets and the Miami Heat.

As always, VI is getting you ready with more Best Bets and Game Previews to aid in handicapping Saturday’s NBA slate.

Due to the nature of Miami’s injury report, the Nets head into this game as seven-point favorites – marking the second largest point-spread that the Heat have been expected to lose since the start of the new season.

While the total for this contest currently sits at OU 231 – the largest ‘over-under’ for a matchup containing Miami so far this year. 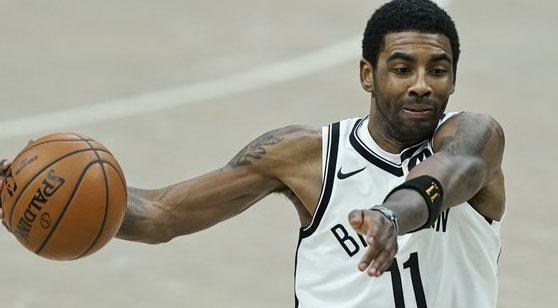 Kyrie Irving and the Nets play with no rest on Saturday as they host the Heat. (AP)

James Harden’s tenure in Brooklyn got off to a smooth start, winning consecutive contests against the Bucks and Magic during the absence of Kyrie Irving.

But since the return of Irving, the Nets have dropped two straight games to the Cavaliers, further illuminating the concerns regarding the chemistry of Brooklyn’s newly constructed ‘Big 3.’

On the other hand, the Heat have won two of their last three games while missing a sizable portion of their starting lineup during all those contests (Butler, Herro).

Miami’s health issues finally caught up to them against the Raptors though, as they put on their ugliest offensive performance of the season so far in a 20-point loss to the Raptors on Friday night.

This is another one of those matchups where the head-to-head history should be taken with a grain of salt, as we have never truly seen a contest between these teams with anything similar to these two current constructions.

The reigning Eastern Conference champions took two out of three contests from the Heat last year, but obviously none of those games were played with Harden or Kevin Durant, so it is difficult to give the Heat any type of edge based on matchup history.

It is hard to get a gauge on how the Heat are performing relative to last season, considering we have already seen them with six different starting lineups containing 12 different starters, and Goran Dragic is still yet to be in any of those lineups.

The Heat actually pose a difficult challenge for Brooklyn’s Big 3, considering they have an All-Star caliber big man (Bam Adebayo) to go along with veteran All-Star guard (Jimmy Butler), which should be the recipe to give the Nets trouble defensively.

Unfortunately for the Heat though, they will only have half of that duo for this contest in Adebayo, and I think Miami is really going to struggle to keep up with Brooklyn in this game without Butler on the floor as a scoring threat.

In the debut of Brooklyn’s Big 3, the Nets really struggled to defend from all areas of the floor (L – 147-135) – allowing Collin Sexton to go for 42 points on 55.2% shooting, while Jarrett Allen, Taurean Prince, and Damyean Dotson all chipped in 12+ points apiece on a combined 54.8% off the bench.

Their second loss to the Cavs’ is still inexcusable for a team of this caliber – but at least the Nets can say they were missing their best player this time around though, with KD choosing to sit out Friday night’s contest to rest on the front-end of a back-to-back set.

Tyler Herro and Butler are both set to miss another contest on Saturday night, likely keeping Gabe Vincent and Kelly Olynyk in the starting lineup for at least one more game.

Since joining the Nets, the Beard’s point-totals and usage has taken a slight hit, but the same cannot be said about his passing and rebounding numbers – averaging 12.2 assists and 8.25 rebounds per game across four contests with his new team.

Harden has recorded 16 or more rebounds + assists in all four games with the Nets so far. Back him to do it again tonight against a Miami defense that he should be able to pick apart relatively easily without Butler in the lineup.

The oddsmakers are listing the Nets at a steep price in this contest and this time, I think it is for a good reason.

Miami might be able to sneak by against mediocre teams without Butler in the lineup, but when it comes to the rosters wielding multiple perennial All-Pro candidates, it is crucial for their best player to be on the floor down the stretch of games when Miami needs tough baskets.

I fear a back-door cover, but Brooklyn should ultimately win this game by more than seven.