Interconference NBA action will take center-stage tonight with the Nets set to host the Clippers in primetime on TNT, and VI is getting you ready with another slate of Best Bets and Game Previews to help handicap all the evening’s top matchups.

Despite currently owning the best record in the NBA, the Clippers opened as a 1-point ‘underdog’ – marking just the second time that Los Angeles has not been favored in a matchup that Kawhi Leonard and Paul George were both expected to play in (+2 @ LAL). However, the line has flipped in L.A.'s favor as the Clips are favored at Brooklyn.

While the total for this matchup currently sits at OU 246.5 – the highest ‘over-under’ for a contest containing either of these teams so far this season. 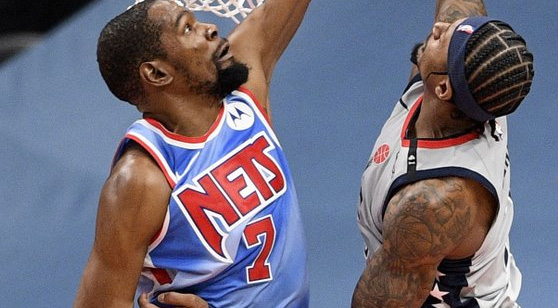 Kevin Durant and the Brooklyn Nets will be looking to bounce back on Tuesday after collapsing to the Wizards. (AP)

The Clippers come into Tuesday’s matchup having won and covered in seven of their last nine contests – propelling them to the third best record in the league ATS at 13-8.

George had a tough night shooting the ball in Los Angeles’ most recent affair with New York (1-8 3PFG), but Leonard played plenty well enough to keep the Clippers afloat in the victory – tallying 28 points on 8-15 from the field while leading LAC to a +19 point-differential with him on the floor (second best – Ibaka +9).

While the Nets head into this matchup as winners in four of their last five games, they have only managed to cover the spread in two of those contests.

Brooklyn’s most recent affair resulted in a 3-point loss to the Wizards, as a devastating 6-point turn-around in the closing seconds of the contest resulted in Washington escaping with a miraculous victory.

Nets-Clippers head-to-head history is nearly useless when it comes to handicapping Tuesday night’s matchup, considering the only matchup between these teams came during last year’s regular season and did not contain George, Kevin Durant, James Harden, Kyrie Irving, and several other starters set for tomorrow’s game.

But for what it is worth, Brooklyn won its only matchup with the Clippers last season – as Kawhi’s 39 points on 56% shooting wasn’t enough to topple the Nets behind a combined 52 points from Joe Harris and Caris LeVert.

So far this season, we have seen the ‘over-under’ for two Clippers games set above 230 points, and Los Angeles managed to cover the spread while keeping the game ‘under’ the total on both occasions (GS, SAC).

The ‘over-under’ for the Clippers past three matchups were all set lower than 220, and while their most recent affair with the Knicks ended up containing 244 total points in it, the other two games across that stretch had an average of just 210 points scored in them.

Los Angeles has failed to cover the spread in just three contests this season that Leonard and George both participated in.

Brooklyn has been a disappointing bet since acquiring Harden back in mid-January – going 6-3 SU and 3-6 ATS while being favored in all but one contest across that stretch.

We have also seen the Nets consistently shooting the ball with extensive amounts of time left on the shot-clock since inserting Harden into the lineup, leading to the ‘over’ cashing in 10 out of 11 games since the big move.

The Nets have left an interesting trail of betting history so far this season, considering Brooklyn games have gone ‘over’ the total at the second highest clip out of any team so far this year (72.7%), but also own the 4th worst record ATS at 9-13.

Harden sat out with a bruised left thigh during the Nets’ loss to the Wizards this past Sunday, but fortunately for them he isn’t listed on Brooklyn’s injury report ahead of Tuesday night’s tilt with the Clippers.