Western Conference regular season action will conclude on Sunday night with Denver and Portland set to square off during the final slate of matchups at nine o’clock eastern time in Portland, Oregon.

Denver enters Sunday’s contest as an 10.5-point road-underdog against the homestanding Trail Blazers – marking the first time the Nuggets have been listed as a double-digit underdog all season.

The total for this event currently sits at 230.5, which is just the third time since the start of April that the total for a Nuggets’ game has been set above 230 (25 games). 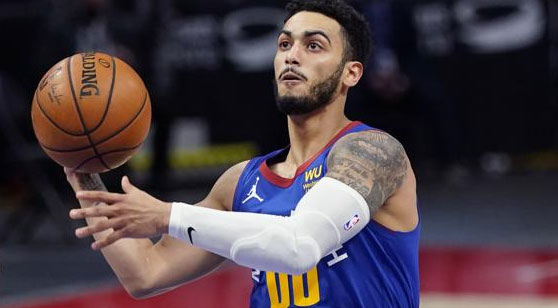 The Nuggets look to lock up the third seed in the Western Conference playoffs with a win at Portland. (AP)

The Nuggets head into Sunday riding a mildly impressive three-game winning streak – considering Denver’s victories during that timeframe have come against opponents possessing a combined record of 75-136 on the season (Timberwolves, Pistons, Hornets).

Denver’s most recent affair resulted in a double-digit victory over the Pistons – as Vlatko Cancar and Markus Howard ended up being the only Nuggets’ players that were asked to play more than 30 minutes in the contest thanks to the 13-point lead they built prior to the start of the fourth quarter.

On the flip side, the Blazers had a five-game winning streak snapped in a nail-biting matchup against Phoenix during their latest matchup.

Damian Lillard put together his seventh straight magnificent shooting effort by posting 41 points on 16-of-23 from the field this past Thursday, but it still wasn’t quite enough star-power to hold off the seven Suns’ players that eclipsed double-digit scoring during Portland’s one-point loss.

Denver has claimed victories in both of its matchups against the Trail Blazers this season – with the first two meetings between these teams containing an average of just 214 points per game, which is comfortably under the total set for Sunday’s tilt.

The first matchup between these teams was quite the rollercoaster – considering Denver jumped out to a nine-point lead prior to the conclusion of the first quarter, and then had that lead completely erased before the start of the second half.

After an uneventful third quarter that ended in a draw though (42 points), the Nuggets ended up running away with the victory in the final stanza behind a 19-point fourth quarter from Jamal Murray as Nikola Jokic finally got to catch his breath during his efficient 41-point performance (53.1% FGA).

The most recent matchup between these teams took place back in late April, and was also a back-and-forth affair that resulted in a victory for the Nuggets.

Despite Murray suffering a season-ending knee injury back in mid-April, Denver has kept the blinders on and continued to plow through the Western Conference standings.

Currently possessing a record of 47-24 on the year Denver will head into its final matchup of the season tied with the Clippers for the third seed in the conference.

Much of the resiliency Denver has shown through Murray’s absence can be attributed to Jokic fully embracing his MVP-form – currently averaging 26.4 points, 10.9 rebounds, and 8.4 assists per game this season, while shooting nearly 57% from the floor and 40% from downtown.

Michael Porter Jr. shouldn’t be shorted any credit in this conversation either though, considering the 22-year-old Missouri product averaged 25 points per game over his previous 10 outings prior to his 3-for-11 performance in Minnesota on Saturday night.

Betting the ‘over’ in Nuggets’ games has also played at a relatively profitable clip this season – with the total cashing at a 38-33 mark in matchups containing Denver, which ranks second across the West in that department.

That high-scoring trend seems to have fizzled out a little bit lately though – considering the total has stayed 'under' in five of Denver’s last eight games.

After getting bounced in a quick five games to kick off the Lakers’ dominant title run during last year’s postseason, the Blazers are right on the verge of getting some temporary revenge.

Portland is deadlocked with Los Angeles in the Western Conference standings, and are now just one win away from forcing the defending champs to participate in a first round play-in series since Portland has claimed victories in two-of-three matchups against King James and company.

It isn’t always pretty to watch, but betting the ‘over’ in Blazers’ games has played at a profitable clip this season – with the total going 'over' in 52.1% of matchups containing Portland, which ranks fourth in the Western Conference in that department.

Portland has looked like a completely rejuvenated team at both ends of the floor over the last week or so though – which seems to have led to ‘under’ results in five of their last six contests.

Now that the playoff format has been expanded to 10 teams in each conference and features four play-in series, the Blazers find themselves set for a critical matchup on the final evening of the regular season – considering a victory for Portland secures the sixth seed in the West and allows them to dodge the play-in round.

Whereas, a loss would give Los Angeles the opportunity to leapfrog the Blazers with a win of their own over New Orleans on Sunday night.

I really don’t think Los Angels is going to be provided that opportunity though – mainly because of the main mentioned in the player prop listed above.

Lillard heads into Sunday following 30-point performances in seven consecutive outings – while shooting at least 50% from the field and putting up nine or more three-point attempts in all those contests, but one.

I’ll ride the hot-hand with Dame here, as Lillard’s current hot streak will end up carrying minimal value in the long-haul if Portland is unable to lockup the sixth seed on Sunday night.

Portland had a five-game winning streak snapped by the Suns this past Thursday, which has left Lillard and company in a vulnerable position heading into the final calendar-day of the regular season.

A Lakers’ win and a Blazers’ loss would drop Portland down to the seventh seed in the conference, which would require them to participate in a play-in series against Memphis or Golden State.

I’ll side with the Blazers to bounce back emphatically here though, as Portland possesses an opportunity to temporarily avenge last year’s postseason elimination by claiming the sixth seed and sending the Lakers to the play-in round with a win in this contest.