The NBA Playoffs first round action continues Wednesday afternoon with the No. 3 Denver Nuggets looking to go up 2-0 in their opening series matchup against the No. 6 Utah. Jazz.

After watching the pair combine for 260 points in Game 1, oddsmakers sent out a total of 218 ½ for Game 1. A lot of those points (30) came in the extra overtime session and the early money knocked that total down to 217. 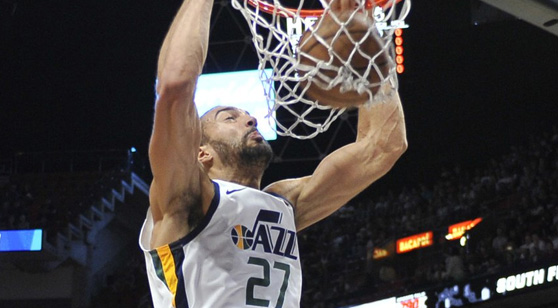 Rudy Gobert and the Utah Jazz will be looking to rebound against the Denver Nuggets on Wednesday in Game 1. (AP)

Donovan Mitchell exploded for 57 points on 57.6 percent from the floor, along with nine rebounds and seven assists in Utah’s game one opener, but that wasn’t enough to hold off Denver’s dynamic duo, Nikola Jokic and Jamal Murray, as they combined for 65 points, 15 rebounds, and 12 assists in the Nuggets 135-125 overtime win on Sunday afternoon.

Utah controlled the pace of the game for the majority of the contest, pushing the game over the total during regulation behind the dominance of Mitchell. Ultimately, depth is what separated these teams on Sunday, Denver’s physical style of play just wearing down Utah’s interior defense as Jerami Grant and Monte Morris were able to contribute in big ways whenever Rudy Gobert left the floor, combining for 33 points off the bench.

The Nuggets now own a 1-0 series lead, and will look to extend that lead to two games on Wednesday evening.

Similar to the Raptors-Nets opener, Denver won and covered as a favorite plus the ‘over’ connected too. The Nuggets also completed the so-called superfecta for bettors, winning and covering for the game, first quarter, first-half and second-half. Overtimes are often a toss-up in the NBA and Denver doubled-up Utah 20-10 to cash tickets as the short favorite.

Jazz vs. Nuggets
How to Handicap Game 2

Despite losing the game, Utah looked sharp in their round one opener against the Nuggets, controlling the flow of the game and shooting well from three-point land, considering they were already underdogs heading into this series, and are now playing without their starting point-guard.

If Clarkson is able to contribute the same way he was able to in game one, the Jazz shouldn’t miss Conley too much, as he has been a disappointment so far for Utah fans this year, averaging just 14 points, three rebounds, and four assists in a starting role.

Jokic got the best of the perennial defensive player of the year candidate, Gobert, in game one, tallying 29 points and grabbing 10 boards on 52% shooting. The key to Utah stealing this game two contest in containing the Joker, and that starts with Gobert stepping up defensively Wednesday afternoon.

Denver stars really showed up to play in their game one matchup on Sunday afternoon, Jokic tallying 29 points, 10 rebounds, and three assists to accompany Murray’s 36 points, 5 rebounds, and 9 assists in Denver’s victory.

The only real concern for the Nuggets in this upcoming contest in containing Mitchell. He went for 57 points during Conley’s absence, and Denver is going to need to bring him back down to earth in game two if they want to take care of the Jazz in this one, who dominated offensively playing a relatively one-dimensional style of basketball without their lead distributor.

The absence of Utah’s starting point-guard had the obvious effect of the Mitchell explosion, and I expect more of that Wednesday evening, but Denver has its injury woes as well.

With Gary Harris and Will Barton set to miss another contest, look for Michael Porter Jr., Jerami Grant, and Monte Morris to fill key roles for the Nuggets and get upticks in volume stats, after the trio combined for 46 points in game one.

Denver is now 4-0 SU against the Jazz this season, but won the first three regular season games by a combined 11 points, and took the first playoff matchup in overtime.

The Jazz have to knock them off at some point this year, and I think game two is a very likely time for them to get it done. There aren’t many teams in the NBA with a better defensive answer to the Joker than the Jazz do.

I expect Utah to go back to the drawing board after game one and come back with a much more sound strategy to approach Wednesday’s tilt. Give me the Jazz +4 in this contest as game two should at least come down to the wire.