For the second straight weekend, the Ultimate Fighting Championship will be back at its Apex Facility for Saturday’s UFC 250 show. The 12-fight card starts with the Early Prelims at 6:00 p.m. Eastern on ESPN, which will also air the Prelims. The television coverage will move over to pay per view via ESPN+ for the main card beginning at 10:00 p.m. ET. 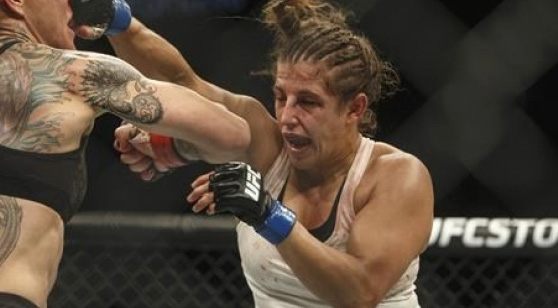 Felicia Spencer is listed as heavy underdog on the UFC 250 betting odds market in her championship match against Amanda Nunes. (AP via Canadian Press)

For the second straight weekend, the Ultimate Fighting Championship will be back at its Apex Facility for Saturday’s UFC 250 show. The 11-fight card starts with the Early Prelims at 6:00 p.m. Eastern on ESPN, which will also air the Prelims. The television coverage will move over to pay per view via ESPN+ for the main card beginning at 10:00 p.m. ET.

In the main event, Amanda ‘The Lioness’ Nunes (19-4 MMA, 12-1 UFC) will try to defend her featherweight belt for the first time since becoming the first woman to hold a title in two different divisions. Since winning the 145-pound strap with a first-round knockout win over Cris Cyborg at UFC 232, Nunes has gone down and successfully retained her bantamweight championship twice with wins over Holly Holm and Germaine de Randamie.

Nunes will put her 10-fight winning streak on the line against Felicia Spencer, the former Invicta FC featherweight queen. The 32-year-old Brazilian double champ hasn’t been beaten in nearly six years when Cat Zingano took her out by third-round KO.

Spencer (8-1 MMA, 2-1 UFC) won her first six pro fights, including a fourth-round submission win over Pam Sorenson to win the Invicta FC featherweight belt on Nov. 16 of 2018. The victory prompted the UFC to sign the Canadian who now fights out of the Jungle MMA camp in Orlando.

The 29-year-old Spencer enjoyed a spectacular Octagon debut, submitting Megan Anderson with a rear naked choke at the 3:24 mark of the opening frame at UFC Rochester. The victory earned her a date with former UFC featherweight champ Cris Cyborg on the main card of UFC 240 last July.

Spencer landed an elbow in Round 1 that opened a big cut on Cyborg’s forehead. Cyborg recovered, however, and beat Spencer via unanimous decision. Nevertheless, Spencer came out of that fight having proven she can take a punch and her reputation was bolstered immensely.

She’ll face the toughest test of her career against Nunes, who has wins over all of the sport’s all-time greats on the female side. Nunes has taken out all three former women’s bantamweight champions, defeating Miesha Tate, Ronda Rousey and Holm with first-round finishes.

She also has two wins over De Randamie, the UFC’s first women’s featherweight champ, and two victories over Valentina Shevchenko, the current women’s flyweight queen who will probably get a third shot at Nunes later this year or in 2021.

Thirteen of Nunes’s 19 career wins have come by KO, while three apiece have been earned via submission or decision. She has the most wins in UFC history for females (12), the most stoppage wins (eight) in women’s bantamweight history and the most KOs in the women’s 135-pound history.

Nunes has been KO’d twice (Zingano and Alexis Davis) and submitted once by Ana Maria India in her professional debut at featherweight on March 8 of 2008. Spencer has four wins by submission and two apiece via decision and knockout.

The 5-foot-8 Nunes has a two-inch advantage in height and a one-inch edge in reach.

Spencer has proven she can take a punch, eating all of Cyborg’s best shots without going down. That fact, coupled with Nunes’s inability to put De Randamie away last time out (although she was so close to doing so multiple times in the opening stanza), has me hesitant to back Nunes by a method of victory. Even the prop for Nunes to win by KO has the -155 juice attached to it, and there’s the potential to get burned if she wins by submission. My first notion is to pass altogether, but I’ll go with one-half unit on Spencer as a +500 underdog. If Spencer can pull the shocker, what’s her path to victory? If (it’s a big IF, I concede) there’s a slight hole in Nunes’s game, it can be her cardio. Spencer is the biggest opponent she’s ever faced. I could see a scenario where Nunes lands some big shots, goes for the kill but can’t put Spencer away. If Nunes gets tired, I can see Spencer being stronger in the clinch and on the ground. We might see Spencer pull a stunner in this spot. 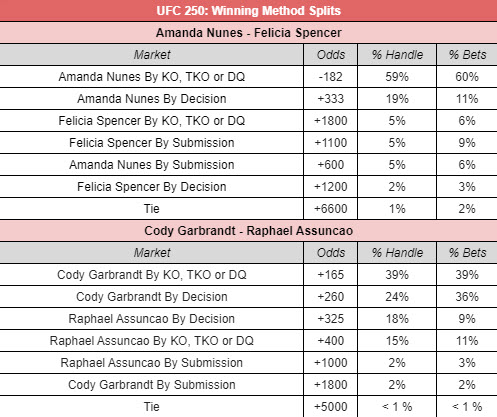 No former UFC champion has lost four fights in a row beginning with the bout that lost him or her the title. Also, no former UFC champ has lost three straight fights and come back to win the belt again. However, at the age of 28, Garbrandt is the youngest former champion to have that opportunity.

Since ascending to the top of the bantamweight division and taking out perhaps the best 135-pounder in the sport’s history with his dominant win over Dominick Cruz at UFC 207 on Dec. 30 of 2016, ‘No Love’ has been knocked out in three consecutive losses.

The odds clearly aren’t in Garbrandt’s favor to get back the belt he relinquished to former Team Alpha Male teammate and bitter rival, T.J. Dillashaw, at UFC 217 on Nov. 4 of 2017. In that contest, Garbrandt nearly finished Dillashaw at the end of Round 1.

After having a minute to recover when the bell saved him, Dillashaw still wasn’t quite right in the early stages of Round 2. However, his movement kept him out of harm’s way as he slowly got his legs back. Dillashaw was fine about a minute into the second stanza, and he got the finish with a TKO (punches) at the 2:41 mark of Round 2.

The UFC booked a rematch nine months later at UFC 227. Another firefight ensued, with Dillashaw again winning by KO at the 4:10 mark of the opening frame. Five months later, Dillashaw took a first-round KO loss to Henry Cejudo and was popped by USADA.

In the build-up to both fights, Garbrandt accused Dillashaw of using performance-enhancing drugs. He tested positive for EPO – the same drug that led to Lance Armstrong’s downfall – in his pre and post-fight drugs tests for the Cejudo fight.

Dillashaw claims he used EPO for the first time to help him shed the weight to go down to flyweight in hopes of becoming a double champ. USADA suspended him for two years, and we’ll never know if he was using PEDs for either or both fights against Garbrandt.

After the second loss to Dillashaw, Garbrandt returned to the Octagon to face Pedro Munhoz at UFC 235. In a back-and-forth slugfest that garnered Fight of the Night honors, Munhoz scored a KO victory with nine seconds remaining in the opening round.

Assuncao can match Dillashaw for most career wins in bantamweight division history with a win Saturday. He’s tied with Uriah Faber for second with 11 victories apiece.

If you have concerns about Garbrandt’s chin after three brutal KO losses, then a potential fourth straight KO loss would most likely be covered with an ‘under’ wager. If you think his head is right and he’s poised to return to the championship form he displayed from 2012-16, then you’re probably thinking he’ll win by KO. After all, nine of Gabrbrandt’s first 10 career fights ended in KO victories. Both scenarios (a KO win or KO loss) line up for an ‘under’ here in this spot. Let’s put three units on ‘under’ 2.5 rounds at a -102 price.

Sterling has won four consecutive fights, including victories over seventh-ranked Munhoz, eight-ranked Jimmie Rivera and 12th-ranked Cody Stamann in his last three Octagon appearances. The 30-year-old ‘Funk Master’ is 6-1 in his last seven scraps, taking his only loss to top-ranked Marlon Moraes by flying-knee KO at UFC Fresno back in December of 2017.

Sterling’s only other career losses came in split-decision setbacks to Assuncao and Caraway. He has seven career wins by submission and two by KO.

Sandhagen has a four-inch height advantage, but both fighters have the same 71-inch reach. ‘The Sandman’ owns four career wins by KO and three via submission.

-- The opener of the main card pits ‘Sugar’ Sean O’Malley vs. Eddie Wineland in another 135-pound showdown. Wineland, the former World Extreme Cagefighting bantamweight champ, is second in UFC bantamweight history in career knockouts with five. He’s also been KO’d three times and submitted on four occasions. Wineland owns 15 career knockout victories. O’Malley (11-0 MMA, 4-0 UFC) is somehow unranked (?!?!), but he’ll have a number by his name after he beats Wineland, who was a +360 underdog at FanDuel late Friday morning. The 25-year-old O’Malley is way too expensive as a -500 favorite. He has seven career first-round finishes. Let’s go with one unit on ‘under’ 1.5 rounds for a +122 payout.

-- As of late Friday morning, FanDuel had Alonzo Menifield (9-0 MMA, 3-0 UFC) listed as a -230 favorite vs. Devin Clark in a light-heavyweight showdown. Menifield has won all three of his UFC fights with first-round knockouts. He has ended seven of his nine career fight with first-round KOs, and the ‘under’ (1.5 rounds) is 9-0. I like ‘under’ 1.5 rounds at a -108 price for three units. Let’s also put one unit on Menifield to win by KO/TKO at a -125 price.

-- I’ll go with one unit on ‘under’ 1.5 rounds for a +136 return in the middleweight scrap between Charles Byrd and Maki Pitolo. Byrd has seven first-round finishes in his 16-fight career, and he’s been finished in the opening frame four times. Thirteen of Byrd’s 16 fights have gone ‘under’ 1.5 rounds. Pitolo has seen 10 of his 17 fights go ‘under’ 1.5 stanzas.