The "Notorious" Conor McGregor returns to the UFC octagon this weekend for his long awaited rubber match with Dustin Poirier. The two last fought in January, where Poirier would be the one to walk away victorious.

In the co-main event fan-favorite Stephen Thompson takes on former title challenger Gilbert Burns in a welterweight bout scheduled for three rounds. Furthermore, fans will also get to witness up and coming prospect Sean O’Malley in action as he takes on UFC debutant Kris Moutinho on short notice.

UFC 264 main card is scheduled to begin at 10:00 p.m. ET from T-Mobile Arena in Las Vegas, Nevada and ESPN PPV will be providing all the television coverage.

I’ll mainly base my prediction on what I saw in their most recent bout, as the first fight was so long ago and in another weight class.

What we saw in the most recent fight was a version of Poirier which was far better than McGregor. Conor is extremely dangerous from a distance, always has been, but he got taken down and leg kicked to hell by Poirier.

Rewatching the second fight, Conor McGregor did not understand he was losing. His corner didn’t address the amount of calf kicks he was absorbing. The advice given in between rounds was to keep the hands high when exiting the pocket. This is worrisome because McGregor used to be a very aware fighter with a high IQ. His boxing heavy approach tells me he himself mostly controls what he wants to train and how to prepare for fights, not his coach.

There was no game plan against Dustin, other than get a knockout inside 60 seconds, yet even that prediction faded out when we saw The Notorious get taken down inside half a minute by Poirier.

The toolbox has become narrow for McGregor. He shows nothing other than a jab and straight left. Poor game-planning, no well-roundedness, and no endurance, which is something we’re not used to seeing from Conor. He knocked out quickly once Poirier smelled the finish. 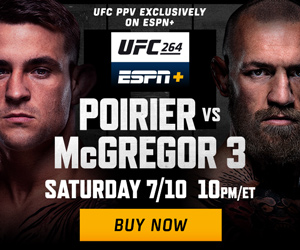 This seems like the striker versus grappler matchup at first, but when you dive into the stats it becomes apparent that Burns has fallen into a common grappler pitfall, which is falling in love with your hands.