The Jacksonville Jaguars will travel to Nashville to take on the Tennessee Titans in a Week 14 AFC South showdown. Kickoff is scheduled for 1:00 p.m. ET at Nissan Stadium and can be viewed on CBS.

The Tennessee Titans are coming off a much-needed bye after losing two straight games. The Titans have been without key members of the offense including Derrick Henry (RB), Julio Jones (WR), and A.J. Brown (WR). While Henry and Brown will still remain out, Julio Jones is likely to return to the lineup this week.

The Jaguars have lost four straight games, most recently getting blown out by the L.A Rams, 37-7. The offense has scored just 48 points and Trevor Lawrence (QB) has thrown one touchdown pass during the four-game drought. With just five games remaining on the schedule, this looks like a team ready to wave the white flag.

Titans head coach Mike Vrabel is 3-0 SU and ATS coming off a bye week. With just a two-game lead over Indianapolis in the AFC South, the Titans will look to increase that lead as the Colts are on a bye this week. The last meeting between these two teams was in week five, a game in which the Titans dominated, 37-19.

The Jaguars are 4-8 ATS this season and just 5-11 in their last 16. Against the Titans, the Jaguars are 2-7 ATS in the last nine meetings. Jacksonville has hit the over only two times on the season, however, the over has hit in 8 of the last 12 games when playing Tennessee. The total in this one opened at 44 but has since dropped to 43.5.

The Titans are 0-3 ATS in their past three games and just 1-2 SU. Chalk it up to injuries, Tennessee has been struggling as of late. There is a sliver of good news for the Titans, they are coming off a bye week and wide receiver Julio Jones could see action again on Sunday. While Jones is not the answer to all of their problems, the Titans will be more than happy to have him back.

Tennesse’s offense has been in shambles without Henry, Jones, and Brown in the lineup. In the four games Henry has been out, Ryan Tannehill has thrown four touchdowns and six interceptions. On the season, Tennessee ranks 5th in rushing YPG (140.8), 23rd in passing YPG (213.4), 16th in total YPG (354.2), and 12th in PPG (25.3). Tannehill’s performance will be the key in this one, he simply has to be better.

The Titans Defense ranks middle of the pack in comparison to the rest of the NFL. They rank 26th in passing YPG (256.3), 6th in rushing yards (97.8), and 2nd in points allowed (24.2). The Titans will need to clean up the passing defense as that is what Jacksonville likes to do. Look for them to put pressure on Lawrence to try and force mistakes. They come into this matchup with 29 sacks on the season (12th).<.p> 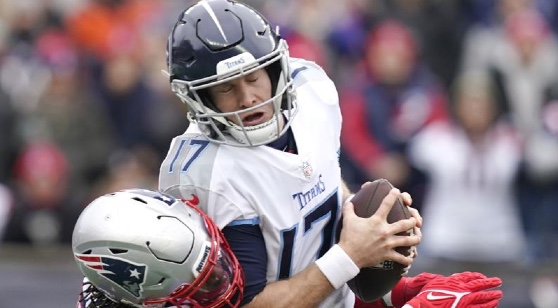 Tennessee has failed to cover the spread in three straight games. (AP)
We may be compensated by the company links provided on this page. Read more